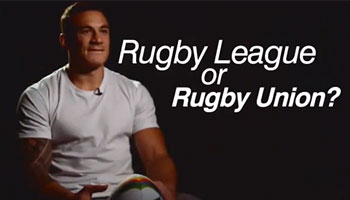 New Zealand dual international Sonny Bill Williams spoke to CNN recently about what it is like to play both Rugby Union and Rugby League for his country, which is the better sport and what makes him happy.

Williams returned to League after a five year stint in Union, and after having helped the Sydney Roosters to a NRL title this year, he had a chance of becoming the first man to ever have won both a Rugby World Cup (2011), and a League World Cup.

That wasn’t to be however as New Zealand were steamrolled by the Australian Kangaroos, who won 34-2 in the final at Old Trafford this past weekend.

“In the last 20 minutes it was disappointing. I guess I tried to over-play my hand, I tried to come up with something special and it just wasn’t to be. I definitely feel gutted for the brothers but full credit to Australia, they were just too good.”

Williams was awarded the RLIF International Player of the Year three days before the final, surprising fans as he wasn’t a standout in the tournament, and made little impact in the final.

It’s been a good year regardless, and Union fans anxiously await his return for the All Blacks, where he will no doubt be in with a very high chance of winning another Rugby World Cup in 2015.