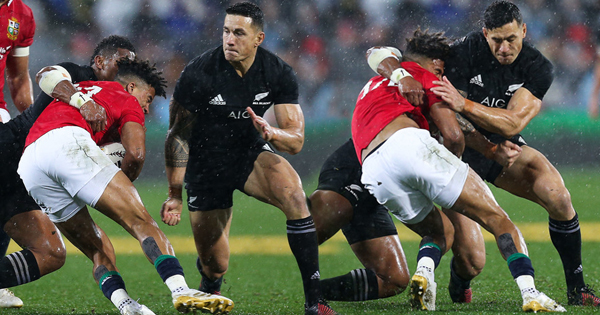 Sonny Bill Williams has said that he let his brothers down following a red card and subsequent four week suspension after the second Test against the British and Irish Lions. Williams will miss the all important decider this coming weekend, as the series is tied at 1-1.

Williams admitted to an act of Foul Play contrary to Law 10.4(g) Dangerous Charging after he used his shoulder to stop Lions winger Anthony Watson in the first half of the Test in Wellington.

The cross-code star was shown a red card by referee Jerome Garces and the All Blacks played the remainder of the game with 14 men, going on to lose 24-21.

The offence was deemed to have been reckless and warranted a mid-range entry level, which usually means a six week suspension. However, due to factors such as his early admission, disciplinary record, good character and remorse, it was reduced to a four week suspension.

Williams will miss the decider as well as the Blues’ final game of the Super Rugby season. He made a short on how he was feeling on Sunday night.

“Obviously really disappointed, but happy with being able to get in there and say my piece,” he said after a three hour hearing. “They’ve come to the conclusion that it was reckless, it wasn’t intentional.

“I’ve got in contact with Anthony and I’ve apologised to him, but very disappointed that I was sent from the field last night and let my brothers down.”

Powerful Highlanders centre Malakai Fekitoa has been called up ahead of the third Test.

All Blacks coach Steve Hansen spoke about how Williams was feeling.

“He’s disappointed. Not for himself, he accepts he’s made a mistake, but he’s disappointed because he’s let the team down. We can’t go back and change it. People make mistakes. It’s a fluid game, it’s a fast game, it’s a physical game so we’ve got to move on from it.”

Do you think that it warranted a red card and suspension, or would a yellow have sufficed?