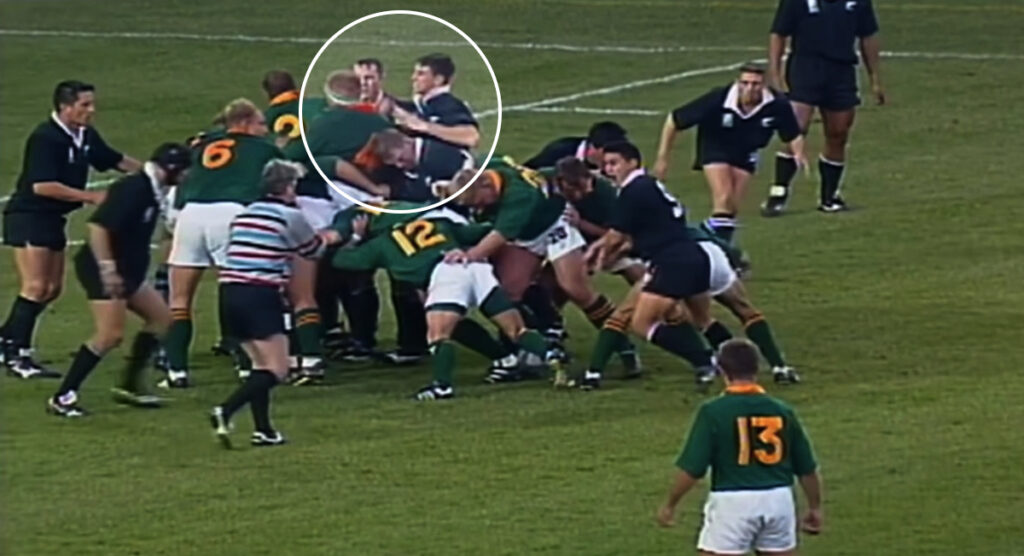 Former Springbok lock Kobus Wiese has opened up about why he was punched by Ian Jones in the closing seconds of the famous 1995 Rugby World Cup final win.

It’s a moment that, all these years later, a lot of fans may not have actually even noticed.

In the closing seconds, with South Africa leading 15-12 and about to win a historic RWC at their first attempt, New Zealand second rower Jones struck Wiese, just as the scrum went down and referee Ed Morrison blew the final whistle.

Most people, even the most ardent of Springbok fans, won’t have noticed what happened. But it’s come to light this week, and Wiese has since open up to Jacques Henning about it, explaining the fascinating – albeit old school – circumstances.

The now 55-year-old was reluctant to talk about it, but has revealed how it came about.

“It’s part of the game.. You remember the [former Bok prop] Johan le Roux incident in New Zealand with Sean Fitzpatrick [in 1994], when unfortunately they didn’t feed Johan well enough so he nibbled on Sean’s ear? People saw it differently unfortunately and “Joe” was suspended for a couple of weeks.

“He was one of the hard men of rugby, he could take it on the chin and also dish it out. He’s also a great guy and a really good person.

“I promised Joe that if there was ever a chance for payback, one of us – his teammates – would oblige. And we’ll leave that there for technical and legal reasons!

“In that last scrum, we paid back the dues for Joe and clearly Jonesy was a bit frustrated as well because he knew it was all over and he started punching. But I didn’t mind, I took it on the chin, because we had paid back the favour and it was all in good spirit.

“We had a cold one – a lemonade – afterwards anyway and we’re friends to this day.”

You can see and hear Wiese talk about it around 28 minutes into the video below.

A short video of the incident:

And it can be seen in the final seconds of this official highlights package too.