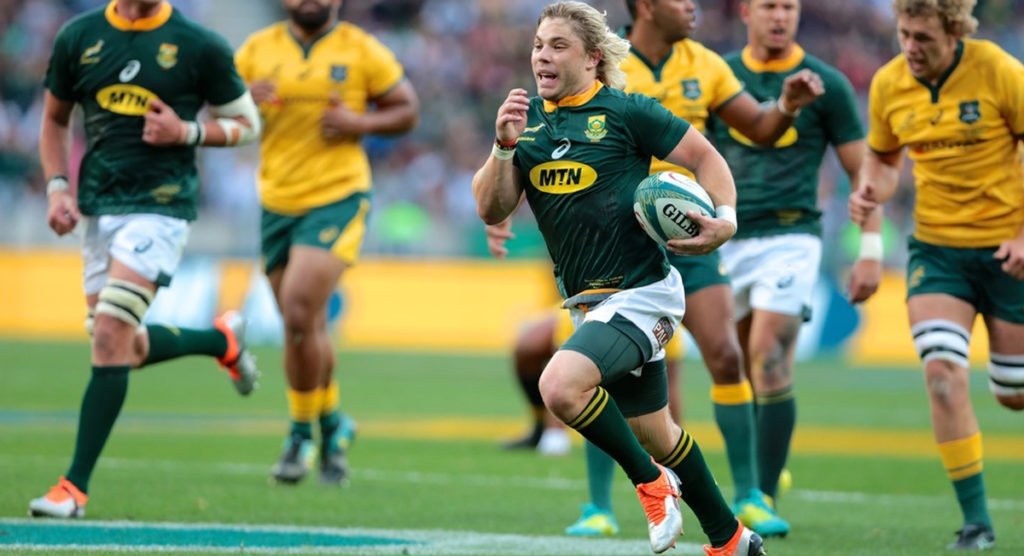 The Springboks went two from two as they backed up their win over New Zealand with a solid performance against the Wallabies in Port Elizabeth, winning 23-12 in front of 41,332 fans at the Nelson Mandela Bay stadium.

The match couldn’t have started better for the hosts as prolific young winger Aphiwe Dyantyi was handed his sixth try in eight Tests when Kurtley Beale swung the ball wide with 20 seconds on the clock.

Faf de Klerk then scored to take things out to a 14-0 lead, but the Wallabies fought back with great tries to Reece Hodge and Will Genia, making it a fairly even contest. The Boks led 20-12 at halftime.

Handre Pollard added a penalty in a low scoring second half, and despite going a man down to the sin-bin and the Wallabies putting on all sorts of pressure, the Springboks defended manfully to pick up their second win on the trot.

“I think tonight we created more chances than we did against New Zealand and if we had converted some of those the game would have gone very differently,” said Erasmus.

“If we’d taken them we could have given them a hiding. In the past couple of months when we made changes, we lost matches so to make eight changes and beat Australia is something to celebrate and before we start to look at where we need to improve, we should probably enjoy the victory.

“In the second half we didn’t play well but we showed a lot of character once again.

“Overall I think the guys are getting the hang of the defensive system but it’s not something that you can get right through talking about it or on the training ground. It’s something you have to make mistakes trying, and learn from those mistakes.”

South Africa are second on the Rugby Championship table behind New Zealand, who they will face in Pretoria next weekend.

Wallabies coach Michael Cheika said that they managed to create opportunities but didn’t manage to take them. His side now heads to Argentina, where they will face Los Pumas in a week from now.