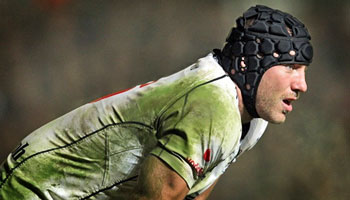 Ulster and Ireland loose forward Stephen Ferris had a storming game against Clermont last weekend, including this big hit on Welshman Lee Byrne. Many of you had requested to see it last week, so rather than let it slip through the cracks, here’s a quick look at it.

Ferris picked up an ankle injury during the match but suffered no long term affects. Against Leicester things didn’t go as planned for his side, but he’s confident that Ulster are on the right track and will be competitive in Europe this season.

“It is great to be back in the white shirt and to be involved in Heineken Cup rugby again. We feel we have a good enough team to do as least as well as we did last season and more. The knock-out stages of the Heineken Cup is what you play rugby for,” he said.

“We have made a couple of great signings and since John Afoa has come in our scrum has been rock solid. BJ (Botha) is a great player and I’ve been watching him for Munster but we replaced one World Cup winner with another. Afoa likes to carry the ball and offers something new in attack.”

This solid hit typified a performance that saw him carry well and tackle hard all night, basically terrorising Clermont. At first glance the tackle looks a little suspect, but he seems to make an attemt to grasp Byrne with both arms, and the point of contact appears to be low enough.

Referee Wayne Barnes, who was right on the spot, seemed happy with it anyway, despite a fairly guilty looking quick glance from Ferris after making the hit. What’s your take on it?