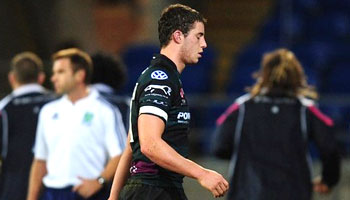 Young Welshman Steven Shingler saw red on Friday night for a tip tackle against Cardiff Blues that resulted in a straight sending off for the London Irish midfielder. The Exiles played the rest of the game with 14, and ultimately went down 24-18 in the Heineken Cup second round game.

Shingler, a former Wales u20 and Scarlets player, had hoped to attract attention with the return to his homeland. “It’ll be nice to go back to Wales and put down a marker,” he said before the match.

“It’ll be nice to show that I’m still here and in the mix and hopefully I can put in a good performance and get people talking about how well I performed and show them that I am one for the future,”

Unfortunately with less than 20 minutes on the park, Shingler got himself red carded by referee Jerome Garces for his tackle on Dafydd Hewitt. London Irish head coach Toby Booth stood by him.

“The way the game is being officiated around the tackle means if you are not precise you may pay a heavy price. The young lad is devastated. There was no malice in it. He is a young man coming back to Wales, wanting to impress,” he said.

“The guy jumped up and if you are not quite in control of your emotions or are just a little bit off with your timing, that is the outcome. The safety of players is paramount. These are big physical people playing a very tough game.

“But if you are out by a fine margin you can pay a heavy price and we have seen that,” he added.

Shingler was sent off at the same time as his brother, Aaron, scored a try for the Scarlets.

Are you okay with the red card coming out for a tackle of this nature, provided it’s consistent?