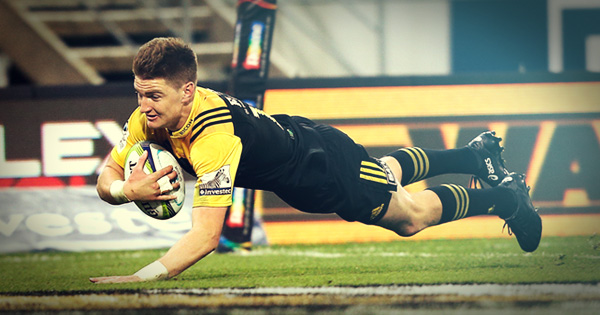 The Hurricanes hosted the Stormers on Friday in what was a fascinating contest that was at one point 22-22, before the hosts’ class got them through for a convincing win in the end. Tonight the Super Rugby action continues, before a full day tomorrow.

*NOTE: All highlights are now up to date below

The Jaguares outscored the Sunwolves by seven tries to five to clinch an entertaining 46-39 win in Buenos Aires.

The Crusaders made it 10 wins out of 10 with a comprehensive 62-24 victory over the Bulls at Loftus Versfeld.

The Sharks continued their impressive home form with a 37-12 Super Rugby victory over the Western Force at Kings Park in Durban.

Propelled by a Rieko Ioane brace and 20 points from Piers Francis the Blues turned in a big 40-33 win over the Waratahs in Sydney.

The Chiefs made light work of the Reds in the second half at Yarrow Stadium, with Stephen Donald grabbing a brace in a 46-17 win.

The Lions had too much firepower for the Rebels in Melbourne, running in seven tries overall in a 45-10 victory to strengthen grip on South Africa 2 Conference.

The Highlanders pulled off a truly unthinkable comeback against the Cheetahs, with three tries in the last five minutes sealing a 45-41 victory.

The Hurricanes moved up to second place in the New Zealand Conference after they beat the Stormers 41-22 with a bonus-point on Friday.