Superstar winger back in England

A cryptic tweet has appeared from none other than ex-England and Wasps superstar winger, Christian Wade. Possibly signaling his return to rugby union duties.

Wade was one of the most prolific try-scorers the English premiership has ever seen. With 82 tries in his seven-year stint with Wasps, he was almost unplayable at times. If it wasn’t for his departure to the NFL in 2018, he could very well be topping the overall try-scoring leaderboard by now. 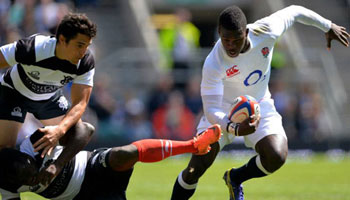 Wade holds an equal premiership record with 6 tries in one match, against Worcester in 2016. It was these exploits alongside his sheer pace and the ability to evade a tackle that caught the eye of the NFL selectors over the pond.

In Wade’s first pre-season game, with his first touch no-less, Wade ran a mazy 65-yard touchdown to set the stadium into a frenzy. Unfortunately for Wade, with the hammer blow that was Covid-19, alongside a serious shoulder injury, his American football dream just hasn’t quite panned out.

Making clear that his options are open and a move could be in place, Wade teased fans:

Another good week in the bag but what’s the next move though?? 🙌🏿

Three years in with the Buffalo Bills, Wade has indicated that a return to the English game could be on the cards with a tweet within the past few hours:

We’re back!!!
What glorious weather we’ve returned too… #TheWades #AllTheWayFromEngland

Now, it’s always possible that Christian and his family are just back for a catch-up and a little holiday.

But with his huge fan base over here, we beg to differ.