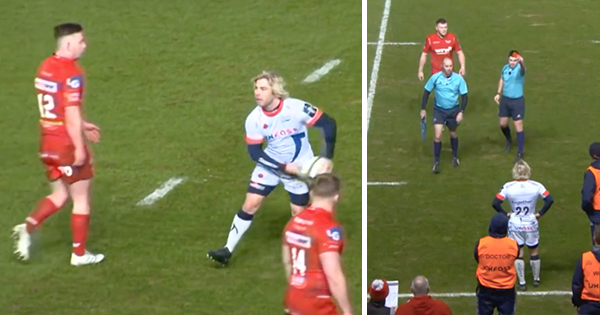 Sale Sharks scrumhalf Faf de Klerk received a fairly out of the ordinary sending off in Friday night’s Anglo Welsh Cup clash with Scarlets. He has, however, managed to avoid a suspension.

Former Springbok De Klerk received a yellow card for a professional foul in the 60th minute, but as he was leaving the field, he intercepted the match ball before tossing it away, therefore slowing down play.

It was a lovely pass, but the referee was having none of it and well within his rights, he issued the speedy number nine a second yellow card, thus resulting in a red.

It was a strange situation, considering there are multiple match balls being used throughout the match, and play had obviously stopped due to the first yellow card. The petulance was clearly unappreciated though, so De Klerk had to walk.

Due to the two yellow cards being issued for technical offences, and not foul play, the charges against him were effectively dropped, and the red card was viewed as sufficient.

“The sanction table set out at Appendix 1 to RFU Regulation 19 determines that the sanction for two yellow cards (where both are given for a technical offence), a sending off is sufficient.”

So he avoids a suspension as is free to play immediately.

With De Klerk missing for just twenty minutes, Sale Sharks were not too troubled and went on to defeat the Scarlets team 45-18.