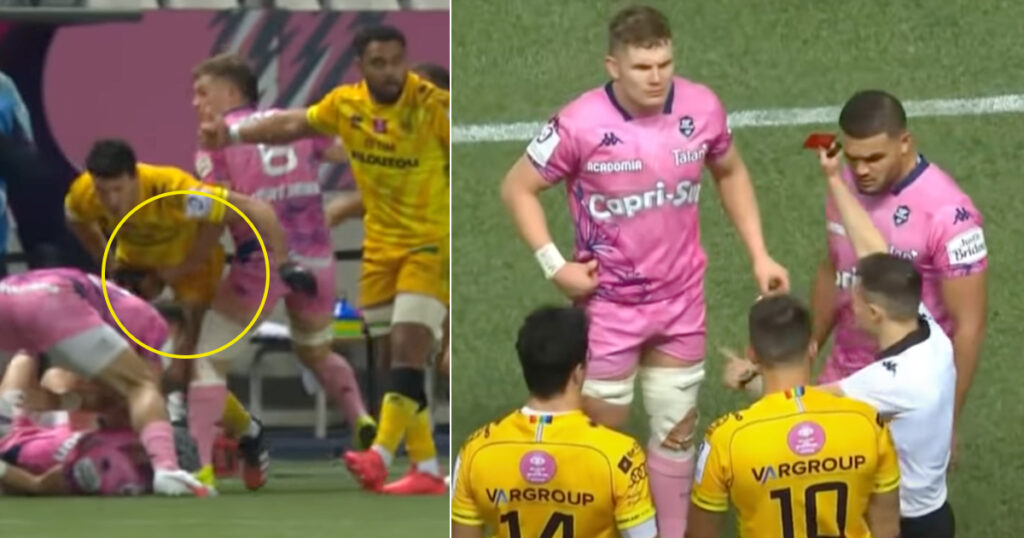 Stade Francais flanker Charlie Rorke has been suspended following an independent disciplinary hearing earlier today. Rorke was red-carded for an incident that took place in the Challenge Cup this past weekend. The man who retaliated, Leanardo Sarto, has also been suspended.

Both players were sent from the field after footage showed Rorke grabbing Sarto below the belt, and Sarto lashing out in response.

Referee Ben Blain referred to his TMO for confirmation of the incident, leaving him with little option but to eject both players from the contest.

The testicle grabbing incident felt under Law 9.27 A player must not do anything that is against the spirit of good sportsmanship.

Relating to grabbing the testicles of an opponent, the infringement has the following sanction entry points – Low End: 12 weeks; Mid-range: 18 weeks; Top end: 24 to 104 weeks.

RELATED: What the disciplinary committees said about Marler, Lawes and Tuilagi

The independent Disciplinary Committee heard evidence and submissions by video conference from the player, who pleaded not guilty to the charge, from the Stade Francais Paris Chief Executive, Thomas Lombard, and from the EPCR Disciplinary Officer, Liam McTiernan.

The committee found that the red card was warranted, however, it decided that Rorke was guilty of a different offence coming under Law 9.11. Players must not do anything that is reckless or dangerous to others, which has the following sanction entry points – Low End: 2 weeks; Mid-range: 6 weeks; Top end: 10 to 52 weeks.

The committee then determined that the act of foul play was at the low-end and selected two weeks as the appropriate entry point. As there was insufficient mitigation to warrant any reduction to the entry point, a two-week suspension was imposed.

Winger Sarto was then suspended for one week for his retaliation, in contravention of Law 9.12. Punching or striking.

The committee too found that the red card was warranted but decided Sarto was also actually guilty of a different offence, coming under Law 9.11. Players must not do anything that is reckless or dangerous to others.

The committee then determined that the act of foul play was at the low-end of World Rugby’s sanctions and selected two weeks as the appropriate entry point. Taking into account the player’s guilty plea and clear disciplinary record, the committee reduced the sanction by the maximum of 50% before imposing a one-week suspension.

You can see the incident again below.