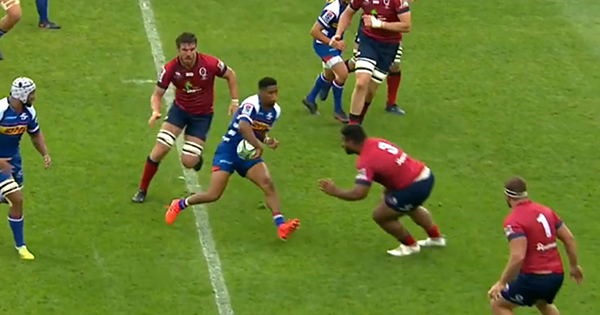 Reds tighthead prop Taniela Tupou has been cited for this dangerous tackle against the Stormers in Cape Town on Saturday. Tupou will face a disciplinary hearing to determine how his next few weeks will look. The Reds lost the game 25-19.

The 21-year-old, affectionately known as ‘Tongan Thor’, escaped a red card according to former Springbok coach Nick Mallett, who watched on in dismay and shared his thoughts from the Supersport studio.

“I do not know how this foul went unpunished. It was impossible for all four (referee, two assistant referees and the TMO) to miss it,” he said. His views were echoed by Naas Botha, who said it was a ‘straightforward decision’.

Referee Marius van der Westhuizen said that his TMO had a look. But with no immediate stop in play, the match continued and the referee felt compelled to move on, rather than have another look, therefore leaving it for the citing commissioner.

Tupou was later cited, alleged to have contravened Law 9.13: A player must not tackle an opponent early, late or dangerously.

The citing commissioner shared the view of Mallett and Botha, believing that the offence did indeed meet the Red Card threshold for foul play. Tupou will face a discplinary hearing this week.

UPDATE: Tupou received a Warning for this offence.

A Warning can be issued for acts of Foul Play that are viewed by the committee to come close to but do not warrant the player receiving a Red Card.

In the finding handed down by the Judicial Committee Chairman Robert Stelzner SC, the Committee ruled the following:

“Having conducted a detailed review of the citing commissioner’s report and all the available evidence, including all camera angles and additional evidence, consisting of a written statement from the Player’s opponent, Craig Barry, and from the Stormers’ physician, oral evidence from the Player himself and the submissions from his legal representative, Mark Martin QC, the Judicial Committee concluded that the level of offending did not breach the Red Card threshold yet warranted a warning under the above Rule.”

“The Judicial Committee concluded that the Player, whilst attempting to use his arms, failed to properly grasp his opponent in the tackle, which resulted in the point of contact being between the Player’s right shoulder and his opponent’s upper chest area, causing the opponent to bounce off the Player.

“An inadequate attempt to grasp his opponent immediately before the point of impact resulted in the action being reckless as to the consequences thereof. This was in contravention of Law 9.11, and close to, but not crossing, the Red Card threshold. As a result the Judicial Committee issued the Player with a Warning.”