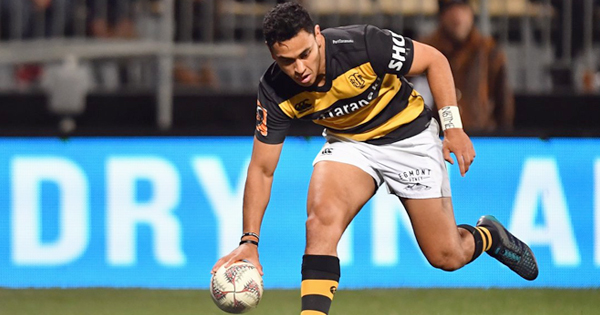 Taranaki came back from trailing 31-7 to win a thrilling clash with Canterbury 55-43 in Christchurch on Friday. With the win, Taranaki claimed the Ranfurly Shield, putting to an end Canterbury’s 13-month custody of the traditional Log o’ Wood.

Taranaki’s second half showing blitzed the holders, as they scored four quickfire tries in one of the games of the season. And whenever they scored, Marty McKenzie slotted every kick with ease in a remarkable performance, landing them mostly from the touchline and without too much fuss in pre-kick preparations.

This is the first time they have held the prestigious Log o’ Wood since 2012.

Taranaki captain Angus Ta’avao was displeased with conceding an early lead, but ecstatic with the way his side fought back in the second half.

“It’s surreal, really. For our boys to come back from 20-odd points down, we could’ve easily put our heads down and given up, but credit to our boys, never gave up.

“All we needed to do was exit well, get down into their half, play some footy.”

The win puts them in a good position to claim the lead in the Mitre 10 Cup Premiership division, as they are now equal first with Canterbury on 36 points, with one game in hand.

They will need to defend their Shield against Manawatu on Wednesday.