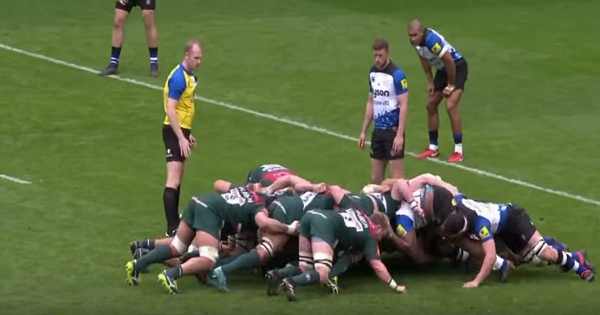 There were strange scenes at Twickenham on Saturday as Adam Thompstone crossed the line for Leicester Tigers, but only after ten reset scrums in nearly ten minutes of play against Bath.

It was certainly one for the rugby purists as Kahn Fotuali’i was penalised for killing the ball on his own five-metre line, with Tigers opting to scrum down after a dominant first 20 minutes.

What came next can only be described as once-a-season. With the scrum constantly going down, Bath were penalised five times and eventually referee Wayne Barnes issued a yellow to tight head Shaun Knight, adding to Fotuali’i’s yellow.

Tigers continued to scrum and finally it held out in the tenth attempt and winger Thompstone was able to slide into the corner.

Two tries from Sione Kalamafoni and one apiece from Sam Harrison and Telusa Veainu added to Thompstone’s effort to take Leicester to third in the Aviva Premiership, after the 34-19 victory. Bath’s hopes of reaching the playoffs seem all but over as they sit in eighth.

According to Leicester Tiger’s Twitter account there were ten scrums in nine minutes and 43 seconds of play, and they’ve managed to cram it in to a two minute video below.

Do you think Wayne Barnes should have issued a penalty try when Knight was given his yellow?