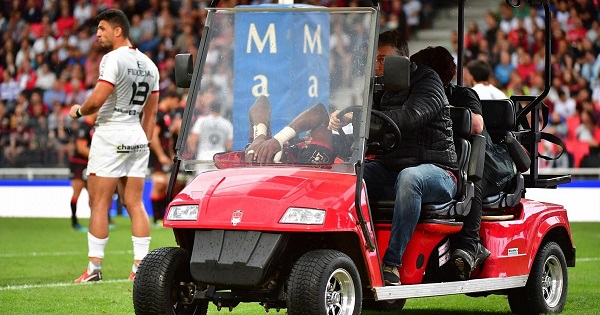 Former England international Delon Armitage has already been ruled out for the season after suffering a torn anterior cruciate ligament while playing for Lyon in the Top 14 last weekend.

Armitage had been part of a promising attack for his side against Toulouse when he was tackled in the 64th minute.

It was immediately apparent that Armitage was in a considerable amount of pain, with referee Alexandre Ruiz halting play soon after.

Lyon coach Pierre Mignoni was pessimistic about the chances of a speedy recovery for Armitage.

“He will undergo a scan quickly on Monday and we’ll see. All we know is that it’s his knee. It’s unfortunate for him and for us,” Mignoni said.

Armitage’s injury is a particularly hard blow for Lyon given that it occurred in the first game of the season. And at 34 years-old, Armitage is approaching the end of his career, meaning this latest injury concern has come at exactly the wrong moment.

Lyon have full back cover with the likes of Jean Marcelin-Buttin, Lionel Beauxis and Jonathan Wisniewski, but Armitage will no doubt be a big loss for the club for the remainder of the season.

Lyon and Toulouse eventually ground out a 16-16 draw, with both teams having a player sin-binned in the closing minutes of the first half.