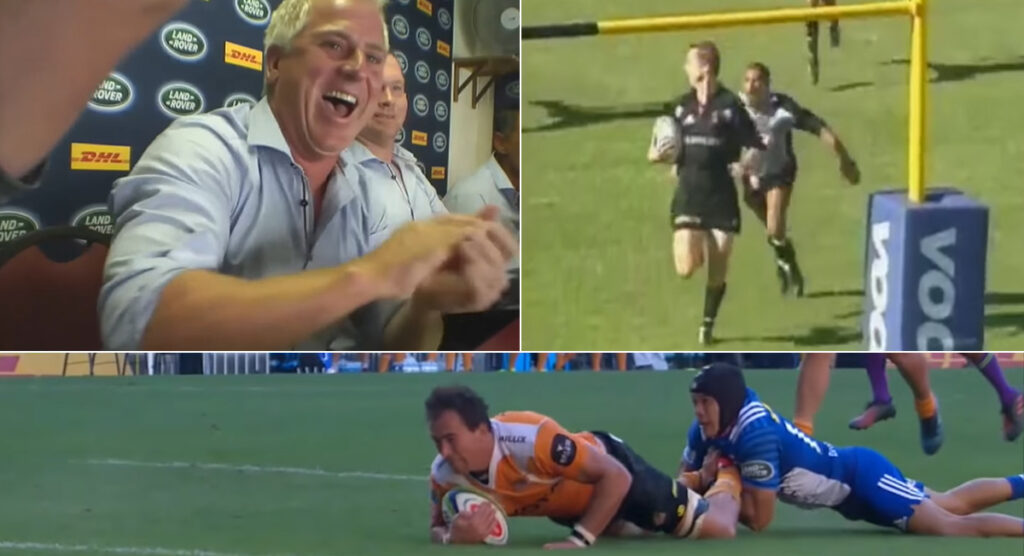 The Stormers host the Cheetahs in this weekend’s Super Rugby Unlocked clash in Cape Town and thanks to Supersport, we can look back at two amusing, impressive and very similar incidents from South African domestic rugby in years gone by.

Three years ago now Springbok World Cup winning star Cheslin Kolbe garnered heaps of praise for an outstanding try-saving tackle he made when playing for the Stormers against the Cheetahs at Newlands.

After trying to shut down an attack and ending up on his knees, Kolbe got up quickly and chased back to track down number eight Henco Venter, who had broken free for what looked to be a certain 60-meter breakaway try.

What happened next would have of course sparked nightmare memories for coach Robbie Fleck, who laughed from the coaches box but no doubt thought back to his infamous moment in 2001 that also featured a man of slight stature, Deon Kayser.

After Fleck, playing for the Stormers back then had broken free for a certain try, the Sharks back came out of nowhere to track him down with a try-saving tackle that will forever be remembered in South African rugby folklore.

“I’d always prided myself on never giving up,” said Kayser in an interview many years later.

“There were many instances before that day when I’d chased in vain. That day was one of those lucky ones when all those other fruitless efforts finally paid dividends.

“I was lucky because Flecky hadn’t seen me coming over his left shoulder. He slowed down in front of the tryline just enough for me to catch him and dislodge the ball in the tackle. It was completely unexpected from his side or my side, I guess.”

And just like Kolbe in the video below, the smaller man proved heroic on the day, showing that in rugby, often heart prevails over size.