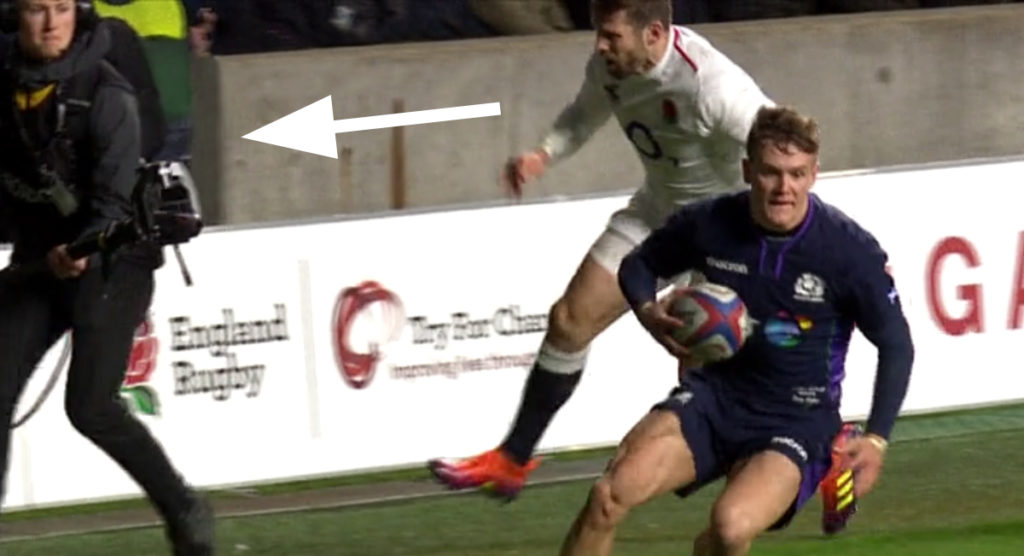 There were outbreaks of outrage on Saturday after a number of people spotted what happened seconds after Darcy Graham flew in for yet another Scotland try in their incredible comeback at Twickenham. While some clearly gave the benefit of the doubt, others were less than pleased.

England and Scotland drew the Six Nations contest 38-38, but only after Scotland had come back into the game after an unbelievable streak of momentum.

Momentum is perhaps the correct word to use when describing what happened just out of bounds too, as Elliot Daly flew into a member of the production crew.

How dare you try and film @Scotlandteam scoring…. off the bus with you…
–@elliotdaly 😂 pic.twitter.com/bYuiWT6LIu

After being unable to reach Graham to make a tackle, Daly overshot and with the camera guy just on the outskirts of play, Daly used him to slow himself down and regain his balance but barged into him in a way that shocked some fans.

Republishing a lot of the extreme vitriol that was on twitter is not necessary but in general, the feeling was that Daly put his shoulder in out of frustration and it could definitely have been avoided.

Guto’s a tough lad. He’ll stand with a straight back when he see’s Mr @elliotdaly again. All forgiven. #hazardofthejob This is rugby – not football 💪🏼🏉

Others, however, felt that he should be given the benefit of the doubt and perhaps the crew guy was always going to be at risk being that close to the field anyway.

The camera operator at hand, Guto Thomas, says he has no hard feelings. He told Wales Online that Daly has since been in contact to apologise.

“He sent me a really nice message, apologising for what happened and asking if I was ok. He explained that he wished he had said sorry at the time, but because everything was going on at 100 miles an hour in the game he didn’t think of it.

“He said he was going to send me a signed shirt as a gesture. Even though I am a Welshman, I am happy to accept an England jersey from him. Fair play to the guy.

“He didn’t have to go to the lengths he did and get in touch. I thought it was a really nice gesture and I replied thanking him.”