The lowdown on this weekends premiership rugby finale

It’s now June, which for rugby fans means the crunch of domestic rugby.

This weekend will see the final round of matches in the Gallagher premiership, as well as the much-anticipated women’s Allianz premiership final.

First up we check out the Friday afternoon clash in the playoff final between Saracens Women and Exeter Chiefs Women.

Saracens have dominated the competition this year with 16 wins in their 18 outings. One of their two losses came away against Friday’s challengers Exeter Chiefs in a 54-12 pummeling.

Exeter found themselves 11 points behind their opponents in this years league, but have not lost a game since February. With this in mind, viewers should expect an exciting affair in which it could be anyone’s game.

Both sides top the leaderboard in terms of most points scored in the league, so there could be some very open rugby played.

The final round of the regular league season in the men’s premiership sees a whole host of teams ready to battle it out for those final playoff and European spaces.

Leicester, Saracens, and Harlequins are already safely in the playoffs, with the first two destined for home matches in the semi-finals. Northampton, Gloucester, and Sale are all in with a real chance of joining them.

With just the one space left, Northampton sit in the driving seat, only needing to win their final game to book their place at the table. With a home match against 11th place Newcastle blocking them from the next stage in the competition, a betting person would suggest the odds are very much in their favour.

Next up we see Gloucester who have the unenviable task of hosting Saracens at Kingsholm. The cherry and whites will need a win against the already qualified Saracens, and will need to hope that Newcastle dismantle Northampton in the process.

Sale find themselves mathematically in with a chance, but logically well out of the running. The Manchester-based side will need a bonus-point win over struggling Bristol, but also have to hope that neither two sides directly above them pick up any points whatsoever.

As we move further down the table, London Irish sit precariously in 8th spot having already played all of their games. This gives Wasps the opportunity to rise past them and claim that final Heineken cup spot, if they can pull off a shock result away to league leaders Leicester.

Although no relegation again this year, finishing bottom of the pile is not a feat wanting to be achieved by any side.

The battle comes down to Worcester Vs Bath. It gets complicated so bare with:

HOWEVER, if Bath get a losing bonus point then Worcester will need to get a try bonus point to ensure they finish on more points, as they have a much weaker points difference than Bath.

If Newcastle don’t pick up any points whatsoever away to Northampton, Worcester win, and Bath get a losing bonus point…then Newcastle finish bottom.

If not here’s the table, you can do your own maths: 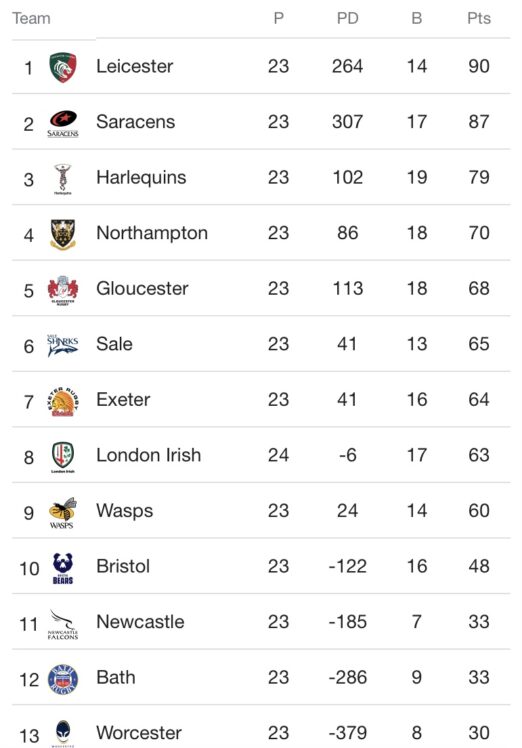