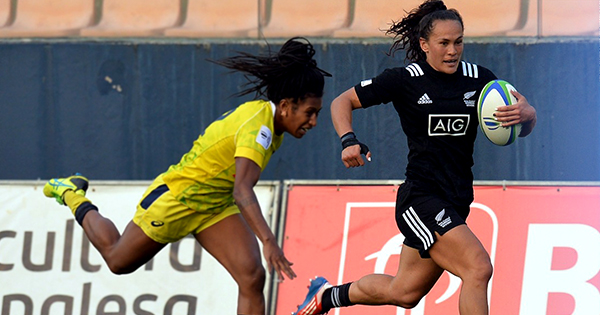 New Zealand’s Portia Woodman has made quite a stir in the women’s game in the past few seasons and her rise to fame was topped off last month when she was named World Rugby Women’s Player of the Year.

The impact of the Black Ferns superstar has not been lost on the wider rugby community in her home country, as well as on the world stage. A silver medallist in the Rio Olympics in 2016 and World Cup winner this year, Woodman beat fellow nominees Kelly Brazier (New Zealand), Lydia Thompson (England), Romane Menager and Safi N’Diaye (both France) to the award.

Woodman modestly said: “Obviously just winning the Team of the Year award shows just how good our team is, and they make me look good. They do all the work and I am out there on the sideline just waiting for the ball.

“My mum wasn’t a big fan of me playing rugby, but I think she was going to support me no matter what and, without them (my parents), I obviously wouldn’t be where I am because they pushed me to do everything I can to the best of my ability.”

Such has been the prominence of Woodman in both the 15-a-side game and Sevens that the winger has become a household name in New Zealand and a strong advocate of women’s’ rugby worldwide.

Former Black Ferns player turned commentator Melodie Robinson spoke about how Woodman has become a “beacon for the women’s’ game.”

“My six and seven year-old kids were watching and all they could say afterwards was Portia Woodman. My six year-old calls her “Portcha” and he has written her name on his hand because he wants her autograph.

“Now if one athlete can do that to two young boys watching the game, that’s great.”

N’Diaye also praised her rival, saying: “[Portia] is an exceptional player. She’s fast, strong and shows her talent at every World Rugby tournament.”