The Top 5 You're Kidding Me (Bloopers) moments 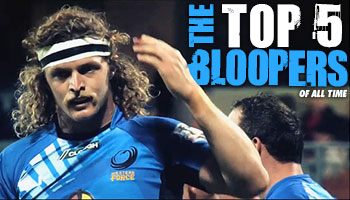 This week’s Top 5 from Rugby HQ was inspired by Nick Cummins’ howler of a clearance kick in last weekend’s Super Rugby match vs the Lions. That got the Fox crew thinking about some of the biggest ‘You’re Kidding Me!’ moments, so here they are.

Streakers always seem to get a bit of a laugh, and that was the case in Dunedin last year when a guy took to the field, only to be tackled by the Highlanders mascot, a giant cock. During the Super Rugby game against the Blues, AJ the chicken took matters into his own feathery hands.

“I noticed a streaker on the field and thought immediately, ‘This is no good, It’s our stadium and we’ve got to protect it’,” he explained after the match. “So I gave it my all, gunned it for the streaker and managed to chase him down.”

In 2011 the Wallabies thumped the Barbarians but as James O’Connor made a movement towards taking a conversion, Peter Stringer spotted the opportunity and swooped in. The ref allowed it, so off he trotted with the ball. Ireland weren’t as lucky against the All Blacks a few years later.

Next up on the list was that bizarre moment when the wind blew the ball all the way back over the tryline, and then there’s a look at Toby Flood charging straight into the uprights. Luckily he wasn’t seriously injured, and it’s a good thing those bits of padding hold so much sponsorship these days.

The number one clip is one that we’ve referred back to many a time over the years, including a few weeks ago when we featured a very funny chat with Munster legend, Donncha O’Callaghan. If you haven’t seen it yet, it’s worth a watch, as is the classic moment featured here as number one.

Most of these incidents, plus a few more crazy bits, and included in the Related Posts below