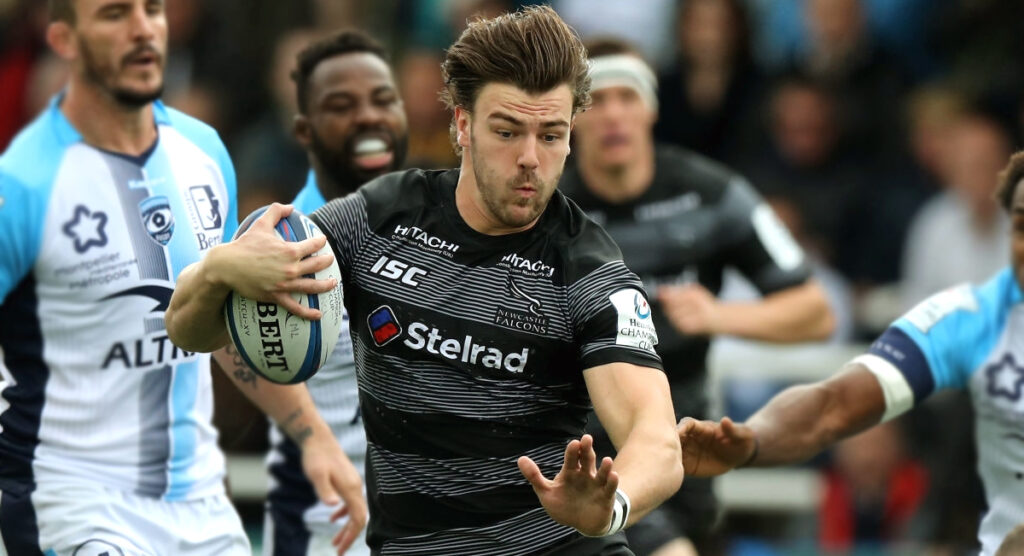 In the week that he returns to competitive rugby action from testicular cancer, Newcastle Falcons centre Johnny Williams hopes that sharing his story can lead to earlier diagnosis and treatment for future sufferers.

The 23-year-old was in pre-season training with the Falcons and fresh from scoring on his England debut when he received the news that he had the stage-two condition, which would ultimately lead to chemotherapy.

Williams starts for the Falcons in Sunday’s Greene King IPA Championship trip to Yorkshire Carnegie after battling back to health and fitness, having played a half last weekend for a Falcons XV in their friendly match against Watsonians.

“It was great to be back out on a rugby field again, and I was just happy to have the opportunity to do what I love,” said the former London Irish man.

“It wasn’t an amazing game – the weather was bad, I only played a half and hardly touched the ball – but most importantly from a personal perspective was just to get out there.

“You’ve got to celebrate all the small victories along the way, and getting out onto the rugby pitch again was definitely one of those after going through a tough time.”

Opening up on his situation, Williams said: “I have to admit I did think about keeping it quiet, but there are more important things than my shyness or pride.

“If by telling my story it gets just one person to check themselves and realise they’ve got cancer, then it will have been worthwhile.

“There are worse kinds of cancer and worse stages to be at than mine was, so I was grateful with that in mind to have a stage-two testicular diagnosis which is 99% curable.

“It was a difficult time, but I’m out the other side of it now and getting on with my life.

“It was mid-August when I first diagnosed, although I’d had it and left it for three months before going and seeing the doctor. I have regrets about that and I’ve learned a few lessons the hard way, but I’m happy with how I’ve dealt with things since then.

“I’ve spoken about the need for guys to check themselves and to seek expert opinions if there’s any inkling that something isn’t right, but for the immediate future I’m just happy to be back out there for the Falcons playing competitive rugby with my mates.”

Explaining his route back into rugby, the centre said: “Getting back into the club after my chemo was a big step, even if it was just doing a little bit of light running to begin with.

“Over time we’ve built that up, I got more involved with the team training and as the weeks went on I got introduced back into the contact training. Last weekend it was an awesome feeling to get a half for the Falcons XV up in Scotland, and to start on Sunday in Leeds will be another massive step.”

Re-joining a Falcons side which is top of the league and unbeaten in all 14 of their games this season, the returning Williams insists there is still room for further improvement.

“It’s been great to watch the boys winning on such a consistent basis, but all the talk among the players and coaches has been about having a Premiership standard throughout the season,” he said.

“We’re not happy with just winning, we need to be playing better and hopefully I can help to play a part in that.

“We’ve been playing well in bursts, and the hope is that I can get my own personal form back and start to make a contribution towards the ultimate season goal of promotion.”

Taking nothing for granted against Sunday’s bottom-of-the-table opponents, he added: “I’ve had a look at Yorkshire Carnegie on the video and they’ve got some good players, so we have to be careful.

“We’re away from home, and we’ll have to be on it to get what we want out of the game. It’s a good pitch, which should help, and I’m really looking forward to it. I just can’t wait to get stuck in.”