'They don't know what's going to happen tomorrow, so they play in the moment' - Ben Ryan's incredible insight into Fijian rugby 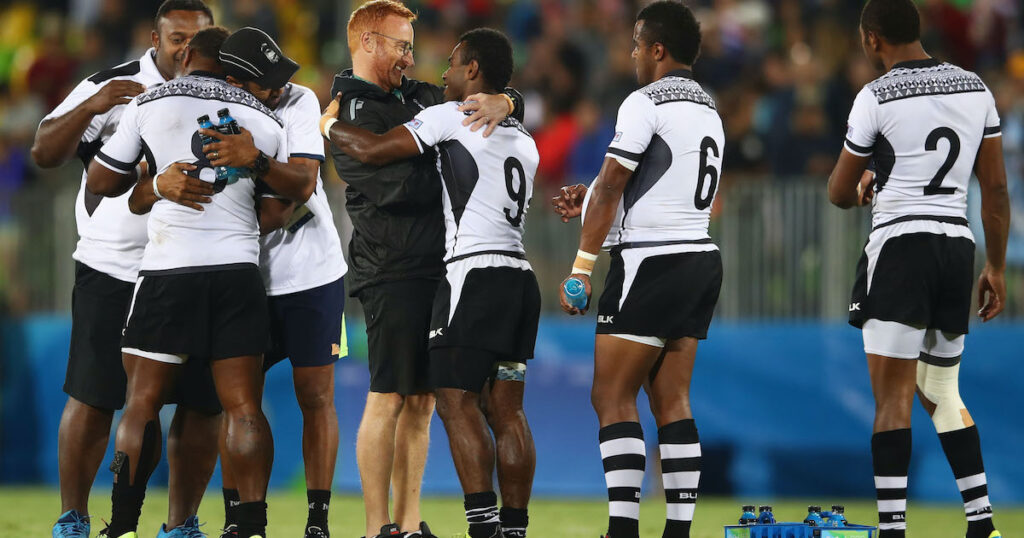 Former Fiji Sevens head coach Ben Ryan knows a bit about superstars in rugby in as much as he has worked with his fair share of them within the national set-up which took them to Olympic gold in Rio four years ago.

While sitting down with Jim Hamilton for an interview for The XV, Ryan talked about his time with the Flying Fijians and what it was like coaching an eclectic band of brothers ready to sacrifice everything for their country.

Ryan was brought in as Fiji’s sevens coach after a long stint with England, and quickly noticed that the natural flair and ability of his new group of players was not just a well-worn cliché, it was an established fact of doing more with less. A common trait among most Fijians.

“Everyone comes from the same background,” Ryan says.

“There’s talk about it being a throwaway comment, but the ‘posh guy’ in our team was our captain Osean Kolinisau and he still had to take in turns to go to school in the mornings because his dad could only afford the bus fare for two out of three siblings.

Ryan says it was this aspect which made it easier for him as a coach, to be able to speak to his players in a way which they would all relate to.

“They’ve all got similar tales as far as what they want. And they are very resilient, you know, it’s a third world country. You don’t know what’s going to happen tomorrow, so that’s why they play in the moment.

“It transcends rugby, and that’s why the throw the offloads. They don’t think about the consequences, they’re just in the moment.”

It’s a fascinating insight into the mindset of Fijian rugby, which those in the tier one and tier two nations have always been aware of, but never fully appreciated.

The liberty of the Fijians on the pitch is clearly an expression of the players living in their own bubble of care-free enjoyment. The passion for the game, the joy of escaping the harsh realities of life at home for 80 minutes is perhaps something more teams would be wise to embrace.

In the full interview, available on The XV, Ryan also talks about creating a better, further reaching image for rugby, and the pitfalls of its current model.

Press releations and a lack of outspoken, real superstars in the game is what Ryan believes has limited its exposure outside of the traditional rugby nations. He references the likes of LeBron James investing in Liverpool Football Club as an example of what could be possible for rugby in the future, as well as giving some advice to team communication officers to boost the image.

“The [communication officers] have to stop diluting how much time the players can spend in front of the camera, talking about things and being their authentic self. Get those personalities out there and stop censoring all of that,” Ryan added.

“You don’t get that in the NBA, you get players who are themselves and sometimes you might not hear what you want to, but who cares? We want to see players being real.”

The relationship between rugby PR teams and the media has already been a love-hate one, with each seeing the other side as the veritable troublemakers.

Some cynical journalists even refer to PR departments as the “press prevention department”. The XV’s Nick Rewcastle wrote about the strained relationship between the two parties in detail in a recent article, and it is clear from Ryan’s desire to boost rugby’s image worldwide, that the former coach feels likewise.

WATCH THE FULL INTERVIEW ON THE XV