Through the Eyes of an All Black - with Nick Evans 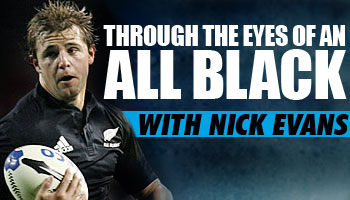 The All Blacks are the current World Champions so this year we’ve launched our new All Blacks channel, brought to you by AIG, and we’ll be focussing on them throughout the season, starting with the first in our series of features with Nick Evans.

Evans, a star with Harlequins since 2008, played for the All Blacks 16 times and is still considered one of a best number tens to have played for New Zealand.

We caught up with him this week to get his thoughts on the current performances and quality of the All Blacks, to hear what he thinks of the British & Irish Lion depth and a whole lot more.

Rugbydump: What are your thoughts on the All Blacks crushing the Wallabies in the first Bledisloe Cup Test, and were you surprised it was so emphatic?

I was surprised actually. It was 20 odd points and it probably could, and should have been more.

The All Blacks got into their stride early on. The Wallabies spoke in the week about being physical and trying to match New Zealand physically, but that didn’t happen. The one thing when you’re playing the All Blacks is that you have to match them or beat them physically.

Where New Zealand stung them is in the turnover ball. You could call it a non-structured attack from a turnover or a loose kick; it’s their ability to realign and find the space which makes them so dangerous. They scored two or three tries from turnover ball, so the Wallabies forced errors cost them. The All blacks were clinical and it has set the tone for the series.

With Dan Carter out injured, how impressed were you with Aaron Cruden, and do you think he has now cemented his place as the next AB’s number ten after Carter retires?

I was impressed, I did an interview before the game and someone asked me how I thought he would go, you have to remember Cruden has been around for a while, he has played in 20 odd tests now and he has taken his opportunities well. He has a had a few more opportunities than I did.

Carter has been injured and is about to go on a sabbatical. Cruden has fitted in to the dynamic well. One thing with the All Blacks is that you don’t lose too much when you lose a player like Carter now. The guys around him are very experienced and the guys coming in to fill know what goes on. When the All Black forward pack is going forward, it can be a bit of an armchair ride, it is pretty easy to make decisions. It will be interesting to see what happens when they are in a close test, but he has proven himself in those tight games before.

He has definitely cemented his place if Carter retires, the question is, will he be patient enough to wait around? Carter has been around for a bit longer and he has an eye on the next World Cup in England. He is still young, so he has time to hang around. That was my issue, I was 28, so I didn’t have the luxury to hang around for long enough. But yeah, I was really impressed and I hope he does well this weekend.

Following the recent Wallabies vs Lions series, do you think that the current depth in talent up north will stand them in good stead for the 2017 Lions tour of New Zealand, and more than likely produce a very different result to 2005?

There was a lot of talk about if this was a tough series for the Lions. There was also talk about the Lions being favourites due to the lack of depth in Australian rugby. I think the Wallabies proved a lot of their doubters wrong; they put up a good fight and took it to the decider. I guess the depth of the Lions squad showed in the last test. They were a big side, I played against them for the Barbarians.

It’s going to be a big tour to new Zealand in 2017. I think that’s the big tour to go on and one you will really want to do well on. We all know what happened the last time.

I think the last Lions team were a good side. Are they good enough to beat the Abs team in 2017? There is a lot of water to go under the bridge between then and now, I think there will be a lot of confidence if some of those core Lions players are still involved in four years. With my New Zealand hat on, I think they will clean sweep it, but that’s just me.

What is the All Black psychology? You’re the best rugby team on the planet, but where do you go from there? [Question submitted by Gavin Dillon via Facebook]

It’s a question I regularly get asked actually. It’s always tough at the top and there is that saying that when you are at the top, the only way is down, but the All Blacks haven’t really done that ever. Every team goes through their blips, but the thing with the All Black’s is perfection and the culture that is created.

What is good is when they need to blood players, they don’t blood players six or seven at a time as that changes the dynamic of the team. They blood one or maybe two players at a time to get those guys clued in to what it takes to be an All Black on and off the field. Once they are integrated, they will blood someone else.

The thing when I was there was that you are an All Black 24/7 on and off the field. There are standards you need to live up to. You do get to have a lot of fun, but when it’s time to get the work done, it’s done to the best of your ability. That’s basically the psychology.

It may have changed now, but when I was there, you are in a fish bowl and there is a lot of expectation in the country and you don’t want to let your mates down.

How do you feel about concussion management of late, and is there an obvious best practice solution from your point of view, or are the correct procedures in place?

It’s a tough one this. I think at the top level it is right. When someone has a knock, you have the concussion bin and it takes the decisions away from coaches and players and puts it into the hands of doctors. That is the right way to go for me, but there is still an issue at grass roots level.

There was a case in New Zealand at club level where a guy had two head knocks in a game and then collapsed and sadly passed away from brain swelling. At the top level we are very well protected. It’s a physical game and there will be head knocks, but you’ve got the best people there to take control and make the right calls.

In the amateur school and club level, you don’t have that luxury. It’s something that needs to be looked at. It’s a difficult one because having a doctor at every game would cost a huge amount of money and you can’t logistically do that.

There needs to be a bit more training for coaches and physios at these lower levels so if someone does get knocked, then there is someone there who knows the signs and we can hopefully avoid another case like that in New Zealand.

For more on concussion awareness and prevention, be sure to check out AIG’s new programme called aHead of the Game. You can also follow them on Twitter @AIG_AOTG and on Facebook at AIGAheadOftheGame

We’ll chat to Nick again soon and follow the All Blacks progress throughout the year on our new All Blacks channel, brought to you by official partners AIG.

You can watch Nick take on the best in Europe this season. For details on Harlequins membership or to secure your tickets to a game at The Stoop visit www.quins.co.uk