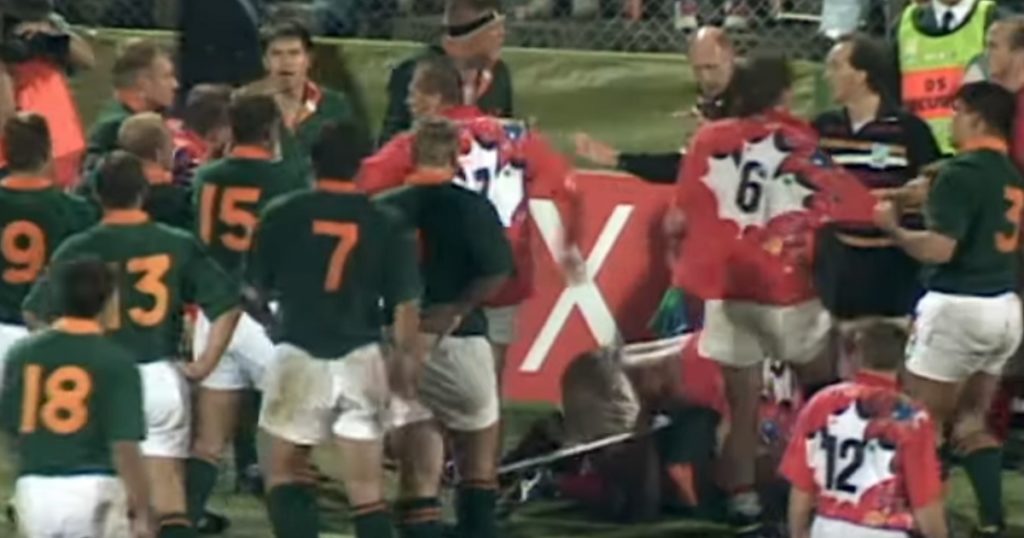 As the build-up to this year’s Rugby World Cup continues, it’s time to take another trip into the past, this time with one of the tournament’s more bizarre and controversial episodes as 1995 hosts South Africa took on Canada in Port Elizabeth.

In this year’s 2019 Rugby World Cup, the two sides meet again in the Pool Stages, on 8 October, but back in 1995 the match was remembered for the ugly mass brawl which produced a Test match record of three red cards.

The game – later labelled the “Battle of Boet Erasmus” –  had a somewhat unorthodox start, adding to the tension of the occasion. Kick-off had been delayed by 45-minutes after a pre-match power outage cut the flood lights.

The Springboks eventually won the match 20-0 but tempers flared in the closing minutes as Pieter Hendriks and Winston Stanley’s light scuffle was gatecrashed by the on-rushing Scott Stewart.

Stewart, the instigator, miraculously got off Scott free as the Irish referee decided to red card South African hooker James Dalton – who had a reputation for getting involved in fracas – as well as Canadian duo Rod Snow and captain Gareth Rees.

Canada was eliminated after the pool stages, having defeated Romania 34-3 and lost to Australia 27-11 in their previous matches.

South Africa went on to famously beat the pre-tournament favourites New Zealand after extra time in the final. But the events of the “Battle of Boet Erasmus” nearly caught up with the host nation come the semi-finals.

Torrential rain in the semis against France nearly forced the cancellation of the match as workers desperately tried to clear the standing water on the pitch. Had that been the case, France would have progressed to the final on account of their better disciplinary record throughout the competition.

But the Canada match did have one positive impact, at least for one player in particular.

While Hendricks and Dalton were banned for the remainder of the World Cup, Chester Williams was able to make himself a national icon on the wing as early as the very next match, the quarter final win over Western Samoa at Ellis Park.

Williams was the only black player in the Springboks side, after the country was previously banned from many international encounters due to the Apartheid regime installed since 1948.

But in scoring four tries in the quarter final victory, Williams gave post-Apartheid South Africa some hope of barriers being broken. And this is the match in some small way, helped that on it’s course.