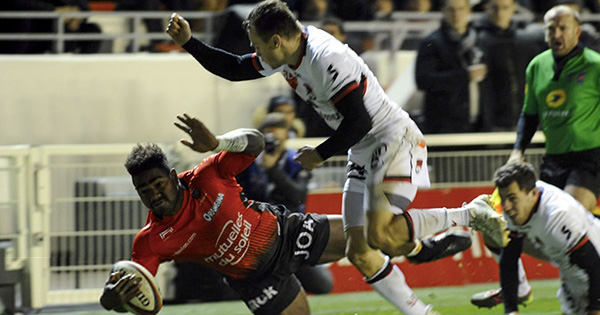 Toulon moved into seventh place on the Top14 table this weekend following a commanding 34-11 victory over fourth-placed Lyon. One of their star players took a big knock early in the second half though, raising some questions from the fans.

Tries from JP Pieterson, Xavier Chiocci, Matthieu Basteraud and a double from Chris Ashton saw the home side come away with all five points leaving their opponents to lick their wounds.

Lyon were first on the board through a Frederic Michalak penalty, but it wasn’t long after when Basteraud showed his formidable power as he barrelled through three defenders to cross the line, with Francois Trinh-Duc adding the extras.

Chris Ashton was next to cross, just after the half-hour mark, some silky handling from his side allowing the winger to cross in the corner.

The halftime score settled at 17-6 but the home side came out for the second even more relentless than the first bagging three more tries in the process. Meanwhile, Liam Gill got over for Lyon in the final minute, but the damage had already been done.

There was some contention during the match, however, when Toby Arnold put in a very impressive hit on Josua Tuisova, often the man to put in the big hits on others.

Questions did arise as to whether or not Arnold had wrapped his arms in the tackle but nevertheless the collision is a sight to see, which you can do below.