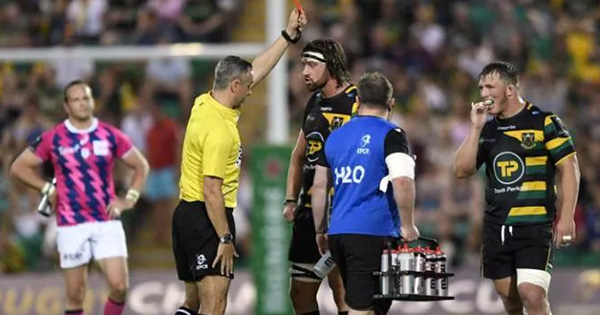 An independent committee deemed the offence to have been worthy of the 12 week entry point.

“The committee upheld the red card decision and found that Wood’s stamp resulted in reckless contact with Camera’s head. The committee then decided that the offence was at the top end of World Rugby’s sanctions and selected 12 weeks as the appropriate entry point.”

However, due to his admission of guilt, overall good record of discipline and remorse for the incident, his suspension was then reduced to 6 weeks.

For his part, Camara was replaced by Morne Steyn but not before getting into a small altercation with Wood after the latter accused Camara of milking the situation.

The win put Saints back into the Champions Cup next season. Unfortunately for Wood, the suspension will mean he will miss England’s upcoming tour of Argentina.