Tomasi Cama smashed by Ignacio Martin at the London Sevens 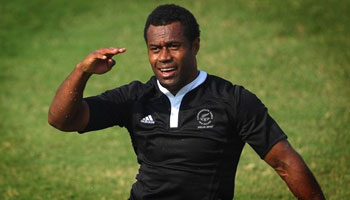 The IRB World Sevens Series has come and gone, with New Zealand clinching the title of overall winners once again. One man who has been an integral part of that is Tomasi Cama. In this clip however, he gets smashed out his boots by a Spaniard.

The beauty of Sevens – often lost on some rugby fans – is not only it’s free flowing nature, but these days it’s all about growing the sport around the world. As many sides quite simply don’t have the resources or physical stature to sustain a competitive fifteen man senior squad, the shortened version of the game is ideal for growth and development.

A country like Kenya is a perfect example of this. Ranked 35th on the official IRB Rankings, in the game of Sevens they’re genuine competitors, and have not only upset some of the big guns, but have even won cup tournaments before. It’s a brilliant stepping stone, and as long as there are young kids tossing a rugby ball about from Mombasa to Nairobi, Sevens has done it’s job.

Spain are a country that actually have a richer history with rugby, having taken part in the 1999 World Cup. They’re ranked fairly decently overall, at 23rd, just behind Uruguay and Namibia.

As you can see in this short clip, they too are taking part in certain IRB World Sevens Series legs. In their match against New Zealand at the London tournament recently, Ignacio Martin blindsided Tomasi Cama with this sensational hit, that was worth sharing on the site.

Cama is actually up for the Sevens Player of the Year award, alongside team mate Tim Mikkelson, and South Africa’s Cecil Afrika. The winner will be announced on October 24th.

. If you have something to contribute, or just want to share something you found online, please be sure to get in touch.