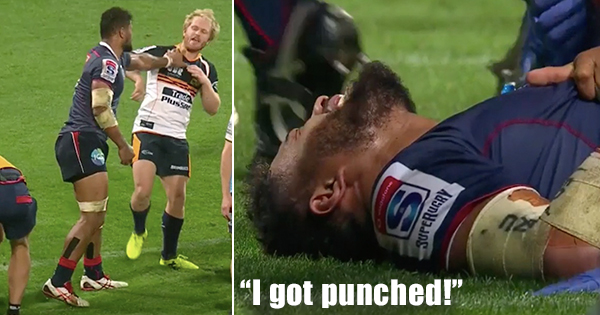 Brumbies halfback Matt Lucas was warned following round 4 of Super Rugby, after his sucker punch in the midriff of Rebels number eight Amanaki Mafi. The incident sparked a scuffle, after Mafi did his best to get Lucas in trouble.

The off-the-ball shot dropped the Rebels and Japan star, who has been a major part of their success so far in this year’s campaign.

He fell to the floor in pain, then laid it on thick in what appeared to be quite a performance.

“He’s hoping that they check the big screen and wonder how he got hurt. I don’t like that.” commented Greg Martin.

When there was no reaction from the referee, Lucas got in his ear, further angering Mafi, who hopped up and gave him a shove. That led to a bit of a melee, with one of the giant Arnold brothers quickly getting involved and Lucas somehow sneaking off unscathed.

While Lucas instigated it, and the quick punch may well have hurt, Mafi’s alleged ‘gamesmanship’ on the floor was not great to see.

It was the scrumhalf that has been officially warned though, after he contravened Law 9.12. A player must not strike with the hand.

A Warning is issued when foul play incidents are very close to, but do not meet the Red Card threshold for citing. Therefore, it was deemed that a Warning in this case was sufficient.

Aside from the theatrics, the Rebels went on to win the game 33-10, scoring five tries to two to notch up their third maximum points haul in succession.