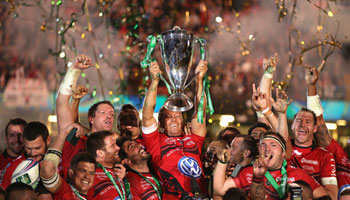 Toulon joined an elite group of teams to have successfully defended their Heineken Cup title as they beat Saracens 23-6 on a historic occasion at the Millennium Stadium yesterday. Jonny Wilkinson contributed 13 points in his final game on British soil.

Both sides started slowly in what was anything but a free-flowing game, but Toulon broke loose to score two fantastic tries, with former Test stars Matt Giteau and Juan Smith both going over.

Today Wilkinson turns 35 but yesterday rolled back the years, playing a hand in both tries as well as converting them. He was faultless from the tee in what was the penultimate game of his career, and managed to slot a trademark dropgoal too, with his right (wrong) foot.

“It’s a hell of a feeling. I can’t say enough how proud I am to be a part of that and a part of this team,” he said post match. “We’ve had a hell of a time and our season’s got one more game but this is something I’ll take with me for ever. There is a lot of relief, a lot of excitement.”

The center paring of Mathieu Bastareaud and try scorer Giteau put in another top performance, and in the forwards Craig Burden was everywhere in the first half (more on that to follow), while flanker Smith rolled back the years to remind fans exactly how good a player he is when injury free.

Steffon Armitage claimed Man of the Match, outplaying England number eight Billy Vunipola in most departments, and again putting pressure on national coach Stuart Lancaster, who was in the crowd.

Saracens have another shot at glory next week in the Aviva Premiership Final against Northampton Saints, but will spend a few days trying to work out exactly what went wrong in Cardiff.

With the win Toulon have become just the third club ever to win back-to-back Heineken Cups, following on from English club Leicester in 2001-2002 and Irish powerhouses Leinster in 2011-2012.

The match featured many big tackles and plenty of bruising clashes, so we’ll get a clip up of some of those soon, but for now here as the highlights of the game, including the post match celebrations.