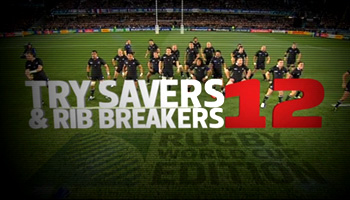 As we all now know, the All Blacks lifted the trophy in New Zealand a few months back, winning at home after another wonderful tournament that included amongst other things, some great tackles.

Following on from the rugby hits series that started way back in 2006, Try Savers & Rib Breakers 12 is jam-packed with the biggest hits and best try savers seen at the 2011 tournament. While it may include a few hits that could be on the wrong side of the law, it’s sure to get the adrenalin pumping.

All 11 previous TSRB’s have been linked to in the Related Posts below the video, so have a browse through those if you haven’t seen them before, and make sure you enter our competition, where one lucky winner will win the boots of a 2011 Rugby World Cup captain.

With this edition of Try Savers & Rib Breakers we’re giving away an awesome piece of rugby memorabilia, coming from a player that actually features in TSRB12! Todd Clever has represented the USA Eagles in two World Cups, was a star on the IRB World Series Sevens circuit, has played Super Rugby, and recently won trophies in Japan with Suntory Sungoliath.

Today you can enter to win the the pair of boots he wore at the World Cup, and more specifically, when he made that big tackle against Ireland, as seen a minute into the video. They’re Adidas Predators and marked with Todd and RWC2011.

Entering is easy, and we’ve given you 3 different ways of doing so:

1) Share the TSRB12 Facebook update with your friends, and include the description:
“I’ve just watched Try Savers & Rib Breakers 12 and entered to win Todd Clever’s RWC boots! http://bit.ly/TSRB12” (make sure it’s posted as ‘Public’, or we wont be able to view it)

3) Leave a comment here
All Registered user comments will go into the draw, so share your thoughts below.

Closing date for entry is 15th May 2012. Using option’s 1 or 2, you may enter as many times as you like . You may also use all three methods to increase your chances of winning.

Music: Ladies & Gentleman by Saliva
Thanks: Graeme & Badger for their respective roles in putting this together
Note: If you are in a country such as Germany and the video is blocked, you can view it here