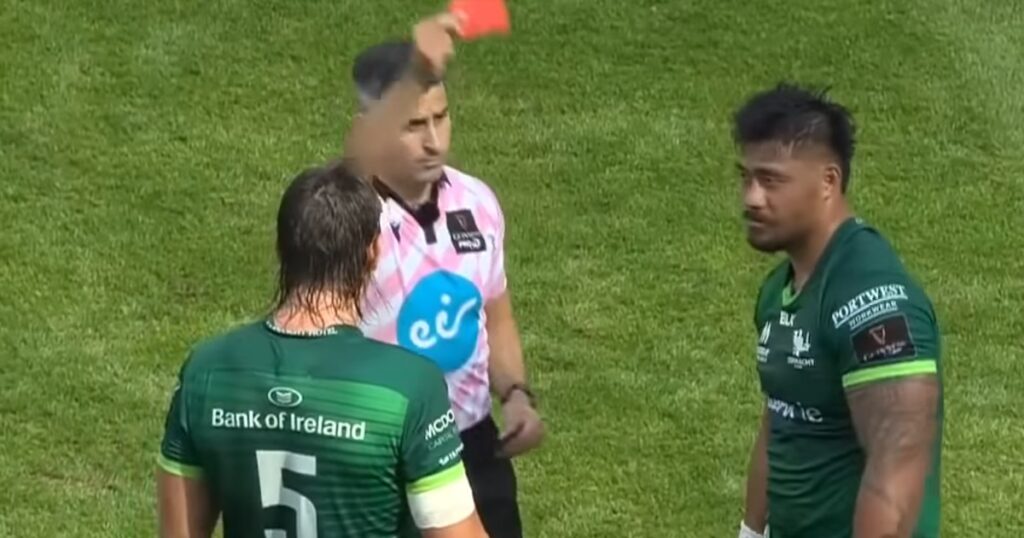 It’s pretty rare to see two red cards from the same side in a game. But Connacht faced an impossible task after seeing just that in a heavy Guinness PRO14 defeat to Munster at the Aviva Stadium in Dublin.

Indeed, not since 2012 has a side had more than one player sent off in a match, and it is only the third time in PRO14/PRO12/Celtic League history that this has happened.

Only twice before in @PRO14Official history has a team had TWO players sent off in the same game: Swansea v Llanelli in 2002 and Scarlets v Ospreys in 2012.

Already a difficult task against a very strong Munster side, Connacht conceded an early try after losing Conor Oliver to the sin bin inside the opening seven minutes.

It got much worse for Connacht thereafter as both Abraham Papali’i and Shane Delahunt were sent from the field, for separate incidents.

Unfortunately for Papali’i, it was his debut match for the Galway-based side as well.

The back-rower was shown a straight red for an upright, high tackle on Munster’s scrum-half Connor Murray in the 25th minute, while hooker Delahunt was dismissed for a leading elbow just nine minutes later.

It was a devastating blow for Connacht, who eventually lost the game 49-12, albeit saving some grace by the fact that they managed to cross the Munster twice while down to 13-men and that the numbers of points conceded could well have been far greater.

Certainly, when compared to the two previous times a side has lost two players to red cards, it could have been a lot worse. The most recent example from 2012, was a bizarre game during which the Scarlets had actually been down to 13-men twice in the game.

Two yellow cards in quick succession in the closing stages meant the Scarlets were very much under pressure, but despite getting one of those players back, they quickly lost another two (permanently), within minutes of each other, ultimately ending the game with 12 players.