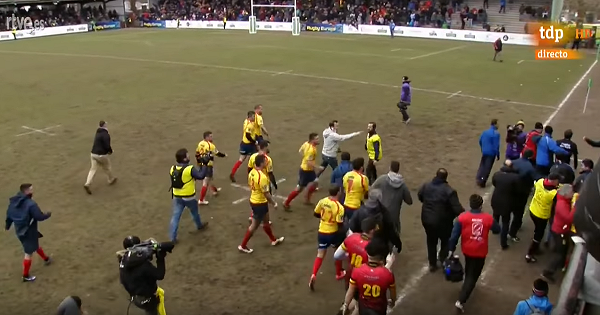 Spain’s chances of qualifying for the Rugby World Cup have taken a huge blow after losing to Belgium, but the result was overshadowed by Spanish players confronting the referee after the final whistle.

Spain needed a win to qualify for rugby’s biggest competition, but they failed to get that after losing the match 18-10, which means that Romania qualify instead.

Controversially, the match was refereed by Romanian Vlad Iordachescu, and it’s fair to say that his performance wasn’t of the highest quality. Reports suggest it was outright farcical.

Players rushed to confront Iordachescu afterwards and some had to be held back by their opponents, with the referee having to be escorted off the pitch.

It raises questions about referee neutrality especially after World Rugby were forced to pull assistant referee Marius van der Westhuizen from England’s clash with Ireland on Saturday after he attended a training session with the home nation.

“When we were assigned Romanian officials, we were shocked. But this is rugby, the values are assumed,” Spain captain Jaime Nava told Radio Marca. “The dressing room is down, sunk. For sure, today rugby has lost.”

A win was all but guaranteed for Spain after Belgium had won just once in the Rugby Europe Championship, but this loss means that they must now play Portugal in a playoff.

The winner will face Samoa home and away, and the winner on aggregate will earn a place at the World Cup, in Pool A with Romania. The losing team will participate in the four-team Repechage in November, against Canada and two other teams.

The video below has been added in now, as it shows some of the 28 penalties against Spain.