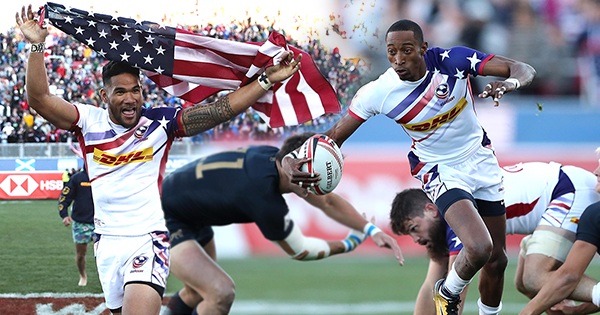 The USA beat Argentina 28-0 in the Cup Final of the Las Vegas 7s to take their first Cup final of the season, with thrilling tries from Perry Baker, Danny Barrett and Carlin Isles. Fiji took third place, while South Africa still lead the series overall.

The victory at home, in Las Vegas’s Sam Boyd Stadium, was just their second ever Cup final win, their first being in 2015 in London. This one was as deserved as ever, with the likes of Baker, in particular, doing the seemingly impossible on the way to victory.

They were unbeaten all tournament, and while they never faced series leaders South Africa, they did make light work of the team that knocked the Blitzboks out of the semi final, Argentina. The USA also upset Olympic champions Fiji 19-7.

Last year the USA came third at home, but this year they corrected that with a dominant final performance that saw Player of the Final Danny Barrett picking up a brace of tries.

“Credit to the men in the arena they were outstanding, they went out there and executed,” said head coach Mike Friday. “They’ve executed all three days but especially today. This is a total squad effort and I’m lucky to have such a great bunch of players and support staff.

“We want to show the sporting landscape in the USA what rugby can be and how it can fit within the American landscape. Hopefully, today will touch and reach a lot of sports fans who realise they’ve got another national team that they can be proud of and that they can support.”

They teams now head to Vancouver for the sixth round of the series on 10-11 March.

The Rugby World Cup Sevens 2018 is under six months away, in San Francisco, so this year’s series has added significance, with seeding points up for grabs, determining the draw for the July tournament.

On the same weekend, the USA Eagles fifteens team were crowned Americas Rugby Championship champions after a convincing 61-19 victory over Uruguay in Montevideo.