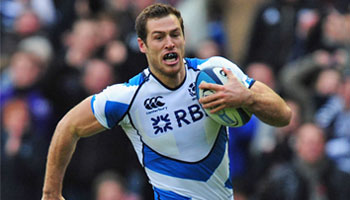 Harlequins have been splashing the cash this summer with one of their purchases being the Dutch born Scottish international winger, Tim Visser. Here is a look at the path to where he is now, and a nice video tribute highlighting some of the great tries he’s scored.

Visser has spent almost six years at Edinburgh Rugby, having been playing for Newcastle before that. The 6ft 4 winger proved a big hit in his time at the Scottish club and has been the top try scorer in the Pro 12 league every season since he joined in 2009/10.

Despite being Dutch and born in Zeewolde Holland, Visser chose not to play for his birth country and instead, after completing a 36 consecutive month residency, was eligble to play for Scotland them in June of 2012.

He has made it known that he is “delighted to join a club with as much heritage as Harlequins” and that he is “looking forward to meeting new teammates and helping the club move forward”.

Harlequins director of rugby Conor O’Shea has said that Visser is “and always has been a finisher and with the margins between winning and losing so small, players like Tim can be the difference. He is a great man, who is really driven to succeed. We are looking forward to welcoming him to Harlequins next season.”