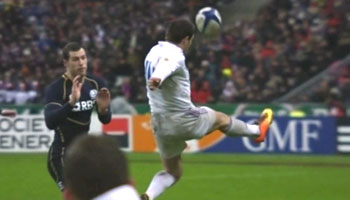 If you watched France vs Scotland on Saturday night you will have seen this great piece of play by French winger Vincent Clerc, who managed to keep an attacking move alive via some impressive quick thinking. France went on to win the game 23-16.

Freddie Michalak, who had an eventful game to say the least, put a cross kick in late in the first half as France looked to attack. He found Clerc, who realised that there wasn’t much point in catching it so nimbly pulled off a perfectly placed kick ahead, as Scotland wing Tim Visser looked on.

The ball was eventually knocked on a few phases later, but it was a moment of brilliance. In fact it may remind you of another Frenchman who at times makes things look easy, Lionel Beauxis.

A few years ago Beauxis, while playing for Stade Francais, volleyed the ball with consumate ease, controlling it in such a way that the ball popped up perfectly into his hands.

You can view that in the Related Posts below, as well as another more recent moment of superb ball control as Welshman Tom Grabham kicked the ball up to himself at the Glasgow Sevens last year.