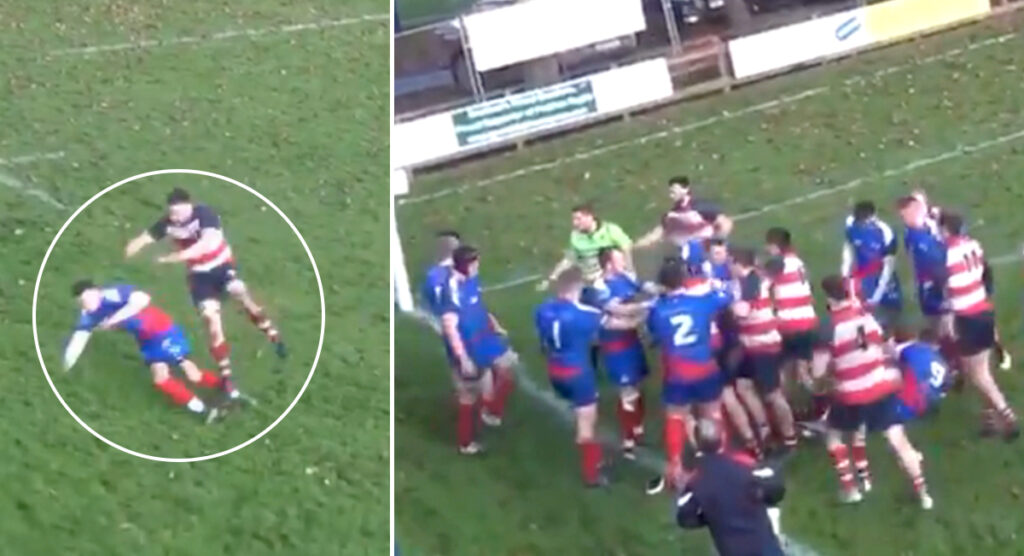 What appeared like a simple late challenge on Kirkcaldy RFC’s full back turned into a full-on brawl, and the subsequent video footage has since received more than a million views and over three thousand comments on social media.

The match in question took place last year, in Scotland’s National Division 2 between Kirkcaldy and Peebles, and the video was shared with RugbyDump as part of the Rugbydump Blitz segment. RD Blitz takes some of the best and worst of the amateur game, highlighting the various goings-on in the club game across the globe.

There is quite frankly, so much going on in this incident, starting with a late challenge that the referee decided was fair.

After that, mayhem ensues with multiple players charging in to lend their supporting weight to the fracas.

While the scenes were quite ugly, and certainly nobody wishes to see this sort of behaviour on the field, some of the actions were so outrageous, they were almost comical.

The Kirkcaldy second row piling into the Peebles player already on the scene was actually a legal looking cleanout, albeit the player clearly did not go in through the gate in the process.

It was a classic case of handbags and probably nothing more than that as the action calmed down eventually. Still, the reaction on social media was strong and, as we have come to expect with the rugby community, taken in completely the right spirit.

Some called out the Peebles captain as a “grass” for pin-pointing the Kirkcaldy left winger to the referee as the main instigator while others played down the severity of the incident, claiming that French club brawls were far more impressive.

You can share your grassroots video clips with us by submitting them at rugbydump.com/blitz