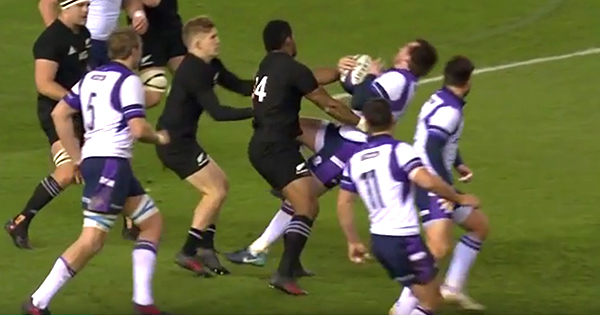 While this week there has been a fair bit of discussion about Kieran Read’s illegal play, New Zealand winger Waisake Naholo was also lucky not to be yellow carded during his side’s narrow 22-17 victory over Scotland, after he took Stuart Hogg out in the air.

It was a clumsy challenge which could have cost the All Blacks dearly. Naholo clearly caught Hogg before the Scottish full-back returned to the ground.

The common punishment for such tackles is indeed a penalty as stated in Law 10.4(i): (Tackling the jumper in the air. A player must not tackle nor tap, push or pull the foot or feet of an opponent jumping for the ball in a lineout or in open play. Sanction: Penalty kick), but the nature and impact of Naholo’s challenge has certainly created a grey area in the rules.

Naholo appeared to catch Hogg in the upper chest/shoulder region and avoided landing on his head. Carley however, responded calmly under a wave of partisan boos to give Naholo the benefit of the doubt.

The Highlanders player had a somewhat average game against the Scots and looked out of sorts. He had already been penalised for similarly careless contact with Lee Jones in the opening minute of the match.

This one certainly stirred debate though, so feel free to share your opinion with us below.