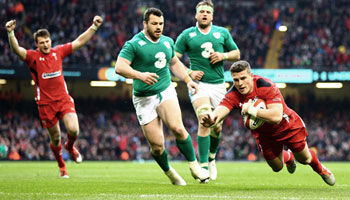 Wales put in a sensational defensive effort to end Ireland’s unbeaten run with a 23-16 victory at the Millennium Stadium. Scott Williams scored a try and Leigh Halfpenny kicked five penalties for the home side, while Ireland picked up a penalty try.

Johnny Sexton was a bit off with the boot early on but got three penalties and a conversion, while Dan Biggar grabbed a well taken drop goal.

Wales’ early 12-0 lead was chopped down by Sexton, and the sides went into the halftime break at 15-9. Wales held Ireland out for long periods of play but the Williams try proved vital to their cause.

“I thought it was admirable the way we came back,” Ireland coach Joe Schmidt said. “If it was disappointing at all, it was at the start. We were down 12-0 without having really got into the game.”

Ahead of the final weekend, which now involved a three-horse race, New Zealander Schmidt added:

“England are at home again next week against France and they’re going to be pretty tough to catch. Wales have got to go away to Italy and I think that will be tough for them but they’ll be looking to enhance their points differential as much as they can.”

View extended highlights below, with more clips to follow soon. Game of the tournament so far? Who would you say are favourites to win the Championship now?