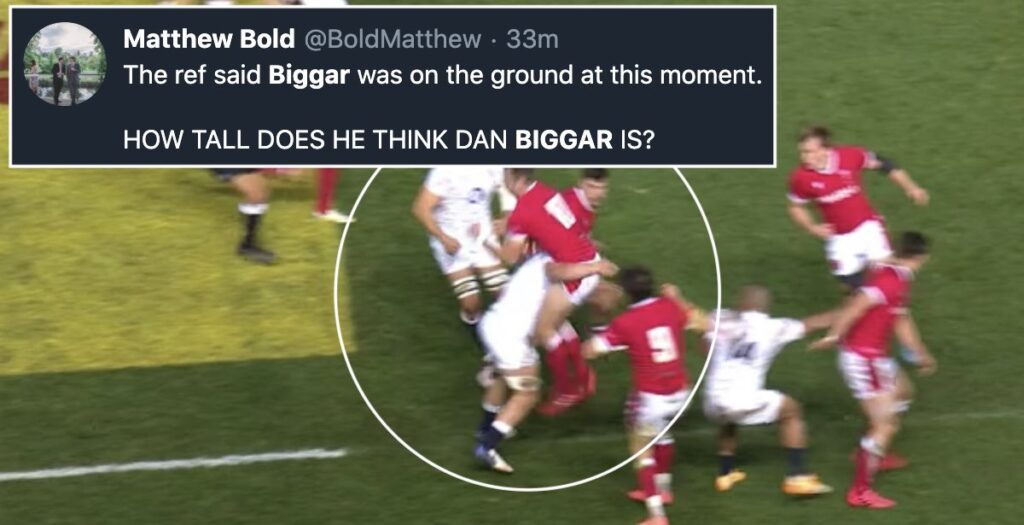 Wales fans are upset by a decision in Saturday’s Autumn Nations Cup game against England when Dan Biggar was deemed to have been tackled in the air.

The incident occurred in the 14th minute of the game when the Welsh fly half clearly had both feet off the ground as he was tackled by flanker Sam Underhill.

Was Dan Biggar tackled in the air in the lead up to the @EnglandRugby try?#WALvENG pic.twitter.com/Tf8PlIjIBk

The incident went unpunished by French referee Romain Poite and England went on to score through Henry Slade, helping the visitors to a 13-24 win at Parc y Scarlets.

Jesus! Biggar was definitely taken in the air.

Biggar was tackled in air too should still be 0-0

Biggar was taken out in the air!! 🤬 Why was the try & conversion still allowed?

But they go to TMO for Wales…..#WALvENG

Some harsh decisions from the officials today. Biggar tackled in the air plus Daly lucky to escape without being punished for the tackle on Adams #WALvENG #AutumnNationsCup

The ref said Biggar was on the ground at this moment.

HOW TALL DOES HE THINK DAN BIGGAR IS? pic.twitter.com/7jaXL8k5A0

That missed tackle in the air on Biggar is so poor from Poite and MacNiece. #WALvENG

Tackle on Biggar began in the air…