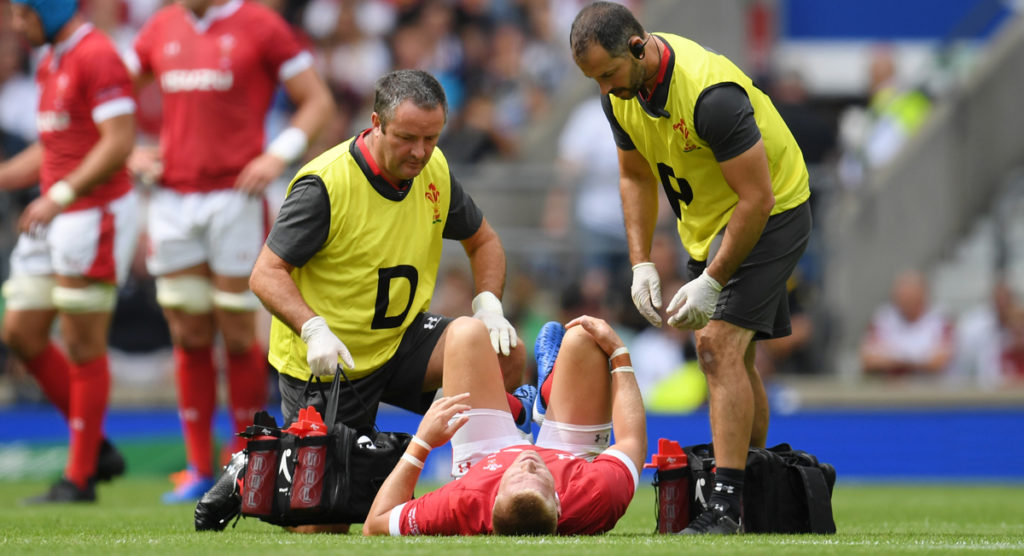 With Wales flyhalf Gareth Anscombe ruled out of the World Cup after suffering an ACL injury against England on Sunday, fans have questioned whether these intense warm up games are completely necessary.

The 28-year-old hobbled off the field towards the end of the first half of the 33-19 defeat, after initially sustaining the knee injury during the first quarter of the match. The Kiwi has now has had his World Cup hopes dashed after establishing himself as Warren Gatland’s first choice 10.

The Test at Twickenham was the first of four warm up games for the Grand Slam champions, with England travelling to the Principality Stadium next weekend, before two Tests against Ireland.

Leading up to these matches, there had been questions over how necessary they were, and the risk of injuries. After only one match, Anscombe has been the first tragic casualty.

Some fans are saying that these matches should be played against Tier 2 nations or regional sides, where they will not be as intense. Two consecutive test matches against England will always be full-blooded and injuries are almost an inevitability, particularly as players are vying for selection and Gatland naming a full-strength side.

This sees Gatland’s squad take a major hit for second consecutive World Cup after both Leigh Halfpenny and Rhys Webb were ruled out in 2015 during the warm up games. However, Wales only played two tests against Ireland in 2015, and one against Italy, which is a much easier workload.

The warm up games should’ve been teams like Georgia, Tonga and Russia! Not against England n Ireland! Could’ve taken them around the country then, not worried about selling out the millennium! Hopefully jaarod or patchell now start closest thing to Anscombe we have now!

Ireland have faced similar troubles over the past few days, with Joey Carbery suffering an injury against Italy at the weekend which will put him out for six weeks.

World Cup warm ups never worth it because of outrageously high injury risks. Carbery really not someone we want to be losing. Has the potential to light up the tournament even if not a guaranteed starter #PrayForJoey

Some fans have said that there are so many matches this time around as it raises money, while player welfare has not been taken into account.

But it is the volume of these matches that is being questioned, as well as the quality of opposition, especially for Wales. Fans will be hoping that Anscombe’s injury is the only major setback they suffer.

Well done all you supporters of these warm up matches. A man’s dream crushed. How many more. It happened four years ago and it is hapeming again

4 warm ups against such competitive sides was such a bad idea considering our lack of depth. It derailed our last WC and now lightning is striking twice

Why not play warm up games against regional sides …. the level would be lower but at least they get game time to practice moves etc it’s always going to be a risk playing these type of games so close to a major competition

While this opens the door for Dan Biggar to start at fly-half throughout the World Cup, this is particularly tough for Anscombe after establishing himself as Wales’ starting 10 during the Six Nations. Not only that, but he has made the move to the Ospreys this season, and this may majorly reduce his playing time.

It is one game down, three to go for Welsh fans, as they hope every player gets through them unscathed.