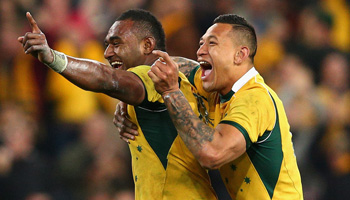 The Wallabies came from behind to win in Brisbane after the Springboks had tried to run the clock down with a lead and thirty seconds remaining. A penalty followed before Tevita Kuridrani scraped the turf to score a famous winning try and claim a 24-20 victory.

The visitors had led the game and looked comfortable and on track for a win around 60 minutes, but injuries and poor replacement management contributed to their demise at the hands of a determined Wallaby outfit, who claimed the Nelson Mandela Challenge Plate.

The Springboks had the game in control following well taken tries by debutant Jessie Kriel and lock Eben Etzebeth, and after leading 20-10 with ten minutes left, a Michael Hooper try gave the Wallabies hope. At 20-17 with little time left and in control of possession, the Boks failed to run down the clock.

A penalty prompted a kick to the corner, before powerful centre Kuridrani scraped the ball on the tryline, despite the best efforts of Schalk Burger, who had a solid game at eighthman.

“We’re often reminded that we’re sixth in the world and South Africa was number two, so for us to get away with the win. I’m really proud of that,” said Wallaby coach Michael Cheika.

Springbok coach Heyneke Meyer spoke of the pain of losing at the death again in Australia, but said they will take valuable lessons from what went wrong in Brisbane.

“It’s heart-breaking to lose like that for a second year running in Australia, but we simply can’t dwell on it and have to take some harsh but valuable lessons to heart. Losing our captain early was tough and we finished the match with eight players who were playing in their 10th Test or fewer than that. It’s not an excuse – we will all be better for it and we will have to look at ways to overcome this.

“We probably lacked some experience at the end when we needed to close the match, but we’ve said from the word go this season that we wanted to use our five matches in the build-up to the Rugby World Cup to get ready,” explained Meyer.

Former Springbok and Italy coach Nick Mallett, now a pundit with Superport in South Africa, warned of the dangers of running down the clock late in the game.

“You have to be very careful to play out the clock by using your forwards in little pods off the loose scrums because northern hemisphere refs don’t like it and they look to the side with the ball and their players for sealing off the ball, and that’s exactly what happened,” Mallett said.

“Schalk did his absolute best to get his hand under the ball, but there is a milli-second there where the ball touches the line. I think the TMO and the referee handled it as well as they possibly could. It was very difficult to see initially whether or not he got it down, but just the point of the ball goes down and just touches the ground.”

Updated video: Below is a match recap, and Wallabies injuries update.