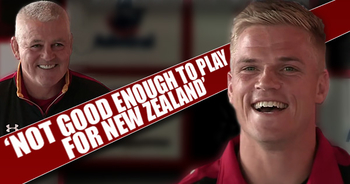 Ever the media darling, Warren Gatland rarely disappoints with his ability to rile opponents and the rugby public at large with his surly approach to press conferences. As you can see here, Gatland landed on the receiving end of some trademark The Crowd Goes Wild shenanigans.

In the clip, Gatland lets his hair down slightly while sidestepping a few loaded puns from James McOnie and his “McOnie Cam”. Hilarity ensues.

Former Blues and Chiefs back Gareth Anscombe is also awkwardly raked over the coals in an attempt to review the Kiwi’s Welsh Bonafides.

Mark Richardson certainly makes no attempt to hide his feelings for Anscombe, and perhaps others, who “aren’t good enough to play for the All Blacks” and choose to play against them.

It’s clear to see how some in the New Zealand media are taking the upcoming series with Wales. As pointed out, Wales are attempting to beat the All Blacks for the first time in 63 years.

Despite the attitude of some in the media, rest assured Steve Hanson and Co. will most certainly be taking a more pragmatic approach.

Anscombe has since been picked in Wales’ matchday 23, while Liam Williams starts at fullback.