WATCH: All FIVE Premiership red cards of the weekend 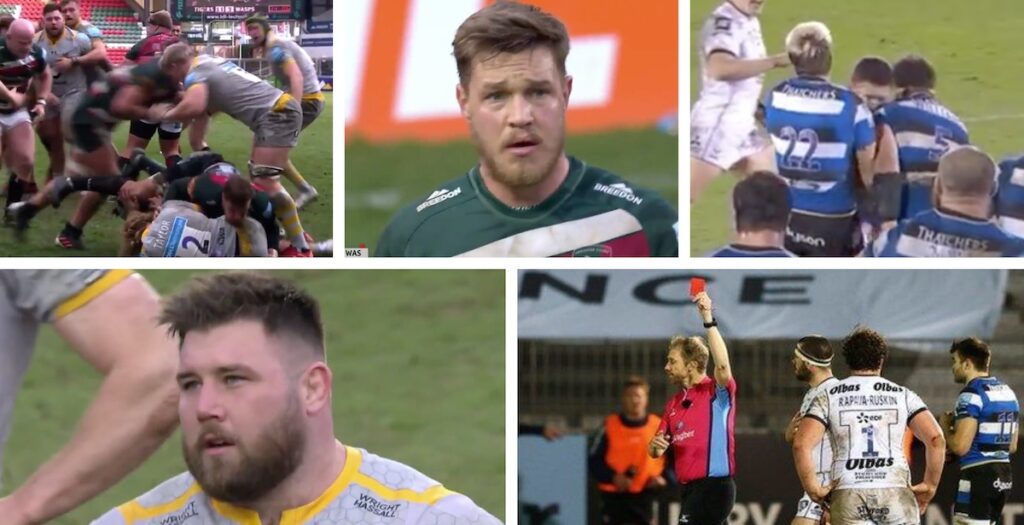 The Gallagher Premiership has seen five red cards so far this weekend for a wide range of dangerous offences.

Two high tackles for Bath’s Mike Williams and Wasps’ Kieran Brookes were deemed reds, Gloucester’s Val Rapava-Ruskin was done for leading with his elbow, Hanro Liebenberg of Leicester tackled a player in the air and Jasper Wiese made a dangerous clear out at a ruck.

The five incidents mean that there have been more red cards this weekend than in the previous nine rounds of Premiership rugby combined.

The first offence of the round was committed by Rapava-Ruskin in the eighth minute of Friday night’s West Country derby when the Gloucester man was done for leading into a tackle with his elbow to the head of the Bath defender.

Red card for Gloucester’s Val Rapava-Ruskin for leading with the elbow against Bath last night. pic.twitter.com/tN4B7qpYUt

Next up was Bath lock Williams who’s shoulder made initial contact with the head of the Gloucester ball-carrier.

Bath’s Mike Williams was also sent off in this game for this high tackle. pic.twitter.com/NV6vCBZb1X

The first red card of Saturday was then presented to Tigers number eight Wiese for this reckless clear out at a breakdown at Welford Road:

Then just after the half time break former England prop Brookes was given his marching orders for this high tackle:

The third and final red of this particular game was shown to Leicester flanker Liebenberg for taking out Wasps winger Josh Bassett in the air following a restart.