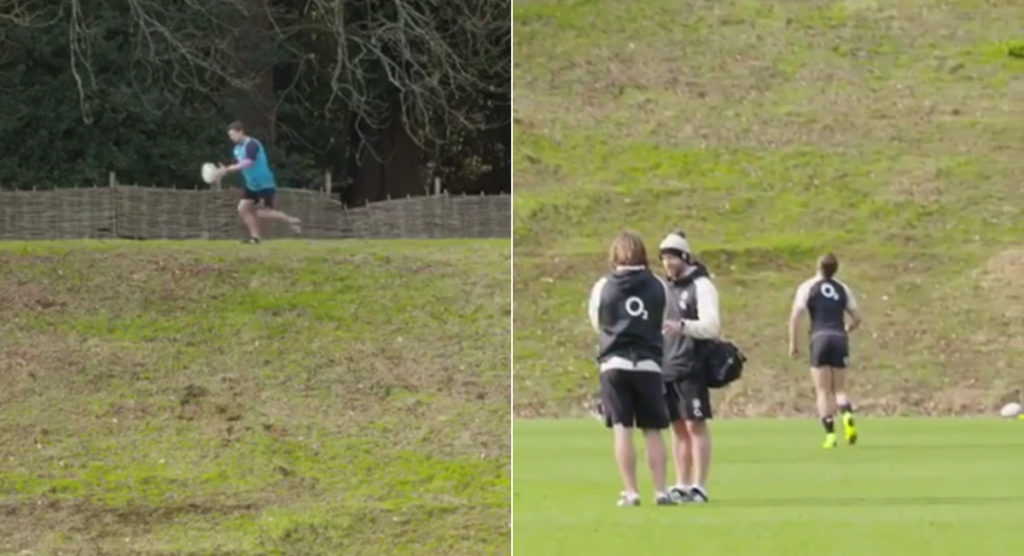 England Rugby have taken to Instagram to share their training techniques ahead of Italy’s visit to Twickenham on Saturday. The clip shows the backs catching high balls with attack coach Scott Wisemantel kicking from a hill.

England have come under a lot of scrutiny in recent months over their ability to deal with the high ball. This has not so much been to do with their performances on the field, but Eddie Jones’ decision to change his fullbacks.

Elliot Daly seems to be Jones’ first choice at fullback at the moment, and with that comes a lot of comparisons with his predecessor Mike Brown. One of Brown’s strongest suits is his dependability under the high ball. On the other hand, some say that Daly is not a natural 15, and is perhaps not as solid.

The Wasp played as a fullback throughout the Autumn as well, and so far in his stint in occupying the backfield, he has not been seriously exposed, despite questions still remaining.

Daly and the much improved Jonny May commanded the aerial battle against Ireland in Dublin, but fell short in Wales last round. While neither were terrible under the high ball, they looked less assured than they had done in the Championship so far. Although it was a hard kick to defend, Josh Adams’ try came from a cross-field kick that Daly struggled with. Despite this, Daly is still a worthy custodian of the 15 shirt.

Therefore, this may have been an area of England’s game that Jones wants to work on.

The coach is scrupulous in his attention to detail, as was shown with England’s high ball practice ahead of the Ireland game. The only trouble is that England are perhaps not going to be tested against Italy and Scotland in the way that they were against Ireland and Wales.

This is particularly due to the fact that Scotland tend to keep the ball in hand more often and kick less. Nonetheless, this may be an insight into what England feel they need to work on.

How will you watch the next rugby World Cup – Enter for a chance to win £100 www.surveymonkey.co.uk/r/WH2MFM3