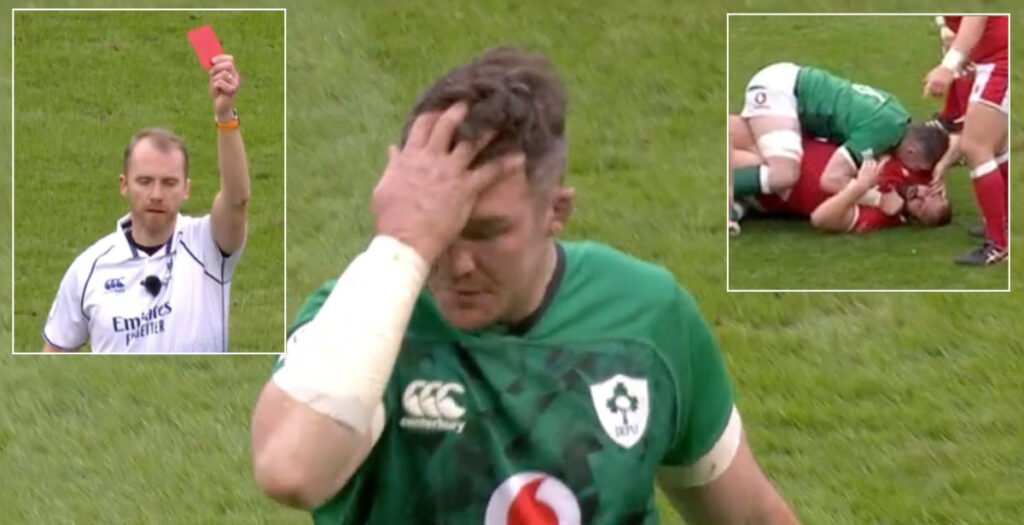 The 31-year-old cleared out Wales prop Tomos Francis at a breakdown in the 14th minute but was ruled by referee Wayne Barnes to have made initial contact with his head.

Barnes told O’Mahony he had no choice but to show the Munster star red and he left the field showing little emotion.

Wayne Barnes initial reaction was “it’s a clear out, there’s nothing wrong, totally unavoidable” next minute after seeing the TMO footage pulls out the red card for O’Mahony. It’s a red card every day of the week!

Head contact a massive focus for referees in this Six Nations.

O’Mahony is not a dirty player but he got that tackle completely wrong pic.twitter.com/qdSevApawE

Coming in as favourites against Wales.

O’Mahony red, Ryan off injured, not even 30 mins gone. pic.twitter.com/f2KK636LNK

If O’Mahony’s was a red (and it was) then Williams tackle earlier was worth another look too. #WALvIRE

Not sure how this tackle from Johnny Williams on Gary Ringrose wasn’t looked at by the TMO?! 🤷🏼‍♂️ #WALvIRE pic.twitter.com/Xn5ZbBL4Oz

Stupid hit from Peter O’Mahony. Definite red, going to be a long afternoon for @IrishRugby