WATCH: The final minute of Exeter's controversial defeat to Saints 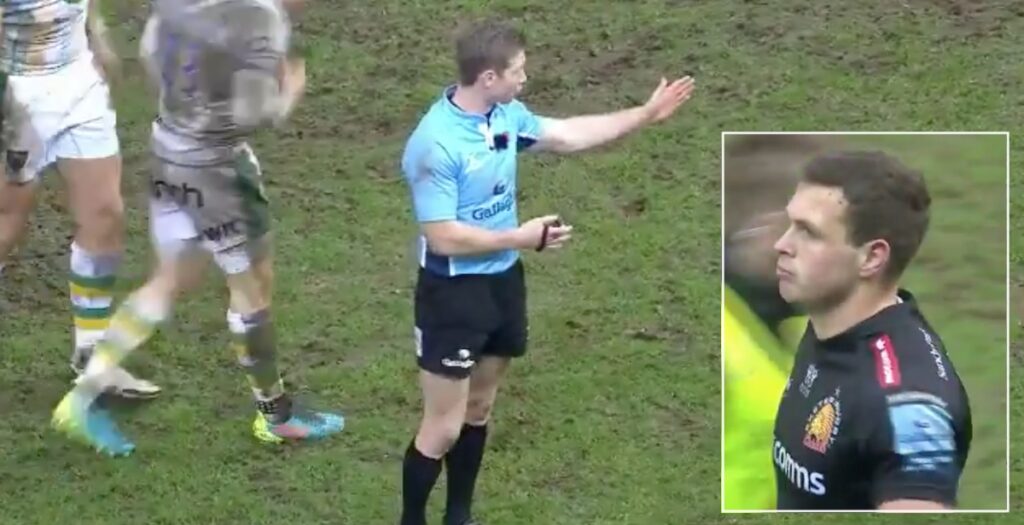 Exeter star Joe Simmonds was at the centre of a controversial ending to a dramatic Premiership clash with Northampton Saints on Saturday.

The fly-half had a touchline conversion to win the game for the Chiefs but after referee Christophe Ridley ruled that Simmonds had begun his run up to kick the ball, Saints players advanced and simply kicked it out to win the match.

Despite protests from Simmonds and Exeter’s Stuart Hogg, Northampton celebrated a huge 12-13 win at Sandy Park.

The incident was reminiscent of Peter Stringer’s cheeky charge down on Wallabies star James O’Connor while playing for the Barbarians back in 2011.

Huge talking point to end the @ExeterChiefs v @SaintsRugby game. Conversion to win it with the last kick and Saints look to have charged early before Joe Simmonds moves. The ref Christophe Ridley doesn’t check with the TMO why?

Not sure Joe Simmonds started his approach there. Just wiggled his shoulders a bit as he tends to do. Could / should ref go to TMO for that? Just to be sure? Big call. @WayneBarnesRef @premrugby

I think one of the great things about rugby is the referee is respected. But today Christophe Ridley dropped a major bollock. Joe Simmonds twitched but didn’t start his run in my opinion.

Crazy finish. Referee Christophe Ridley ruled that Joe Simmonds had started his run-up for a match-winning conversion, Northampton rush up and Sleightholme boots the ball into touch, game over. Ridley straight down the tunnel. Simmonds never moved. #EXEvNOR