Wayne Barnes humbles moany Ma'a with a schoolboy telling off 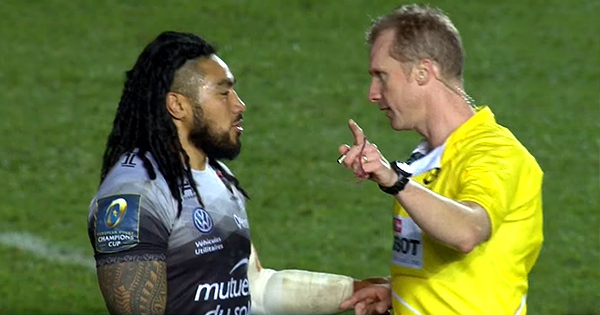 He may have won World Cup’s and be considered one of the best All Black center’s ever, but Toulon center Ma’a Nonu was well and truly put in his place by Wayne Barnes on Saturday. The experienced referee had no time for Nonu’s whinging, so reminded him who is in charge.

Nonu was appealing for a yellow card as things got a bit heated during the Scarlets and Toulon Champions Cup clash, but Barnes was having none of it.

“Let’s make it really clear,” Barnes explained. “You come and ask for a yellow card, you’ll get one. Understand?”

Nonu sheepishly agreed and that was the end of that.

It’s similar to the classic moment we featured here all of ten years ago, when Barnes famously gave Martin Corry and Steve Borthwick a telling off, in a fine example of a referee asserting his authority, despite the experience and calibre of the player’s in question.

Scarlets kept their lead and held on for a 30-27 victory, which sees them facing La Rochelle in the next round of the tournament, the knock out stages.