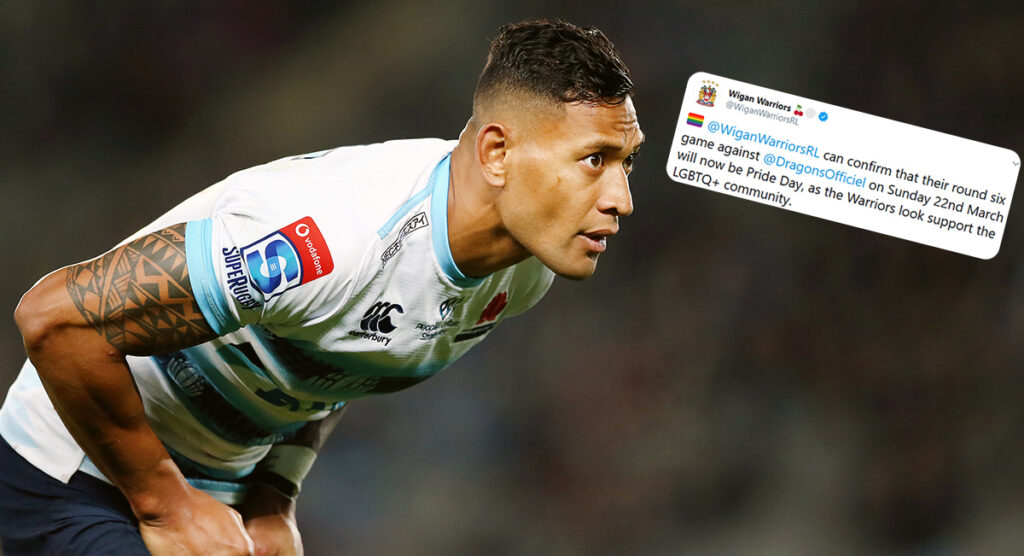 Former Wallabies star Israel Folau has today been signed by rugby league outfit Catalan Dragons, his first signing since being sacked last year. In a fascinating response, Wigan Warriors have since taken a stance against the move, with a subtle yet obvious gesture of their own.

The former Waratahs fullback is making the switch back to rugby league, after reaching a settlement with Rugby Australia in December.

That followed months of discussions and hearings after his homophobic social media comments landed him in hot water.

After previously being warned for similar offences, he expressed that “hell awaits” gay people.

Today, he signs with the French Super League club in a bid to continue playing, after previously having been a star in rugby league’s NRL in Australia.

30-year-old dual-international Folau has not played either code since being sacked by Rugby Australia for his homophobic comments on social media. Shortly after today’s signing, Wigan Warriors announced that their match against the Dragons on 22 March will be a Pride Day. 🏳️‍🌈

The Rugby Football League and Super League have said that it was a difficult decision to allow him into the competition.

“The player has not been charged or found guilty of any criminal offence,” an RFL statement said.

“However distasteful his previous comments, we don’t believe that, under our current regulatory framework, these can prevent his participation in the sport.

“We have sought and received reassurances from both the player and the club regarding future behaviour.”

Rival club Wigan Warriors, however, today announced that their fixture against the Dragons will now be a Pride Day, with players wearing rainbow laces and socks.

“Our community foundation have a long history of supporting local LGBTQ+ groups and initiatives, and we want everyone who engages with our game to feel welcome, valued and most of all, respected. Rugby League has a strong history of inclusion, of breaking down barriers and of being a forward-thinking sport. I think that today more than any day that it is vitally important we reiterate that message.”

🏳️‍🌈 @WiganWarriorsRL can confirm that their round six game against @DragonsOfficiel on Sunday 22nd March will now be Pride Day, as the Warriors look support the LGBTQ+ community.

Folau released a statement of his own.

“I’m a proud Christian, my beliefs are personal, my intention is not to hurt anyone and I will not be making further public comment about them,” he said.

“I look forward to my return to the great game of rugby league with the Catalans Dragons.”

What do you think of the signing, and the response? Let us know in the comments below!