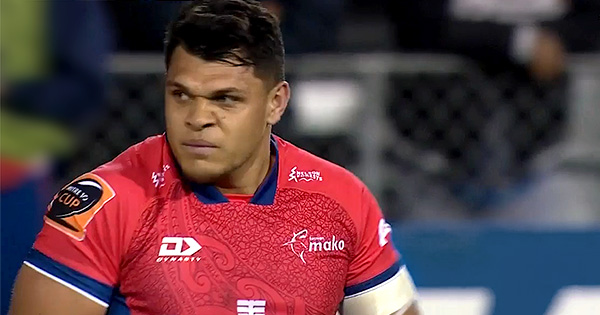 The Tasman Makos upset Canterbury with a convincing 25-17 win in Blenheim, avenging their loss in last year’s Mitre 10 Cup final. There were a number of debutants on show, but it was the reigning champs’ first loss in the opening game of the tournament in six years.

One of the tackles of the match came from 116KG midfield monster Levi Aumua. He was helped ever so slightly by debutant winger Solomon Alaimalo, but it certainly gave Canterbury’s young Braydon Ennor something to think about.

Unfortunately for Ennor, who did look dangerous with ball in hand at times, his night was summed up by getting smashed again a bit later, that time on the line and again by another back.

While the final result may make it look like a close run thing, it was anything but, as the scoreline was flattered by two late tries when Tasman were down a man to the sin bin. They led at 22-3 at one stage.

Powerful centre Aumua crossed for a try of his own earlier in the match, with one of the other highlights being Quinten Strange’s try, which came from a long left to right pass by hooker Andrew Makalio, who went on to pick up man of the match.

Alaimalo himself finished off a lovely try, on a night that certainly belonged to the Makos.

See the big tackle below and match highlights under that