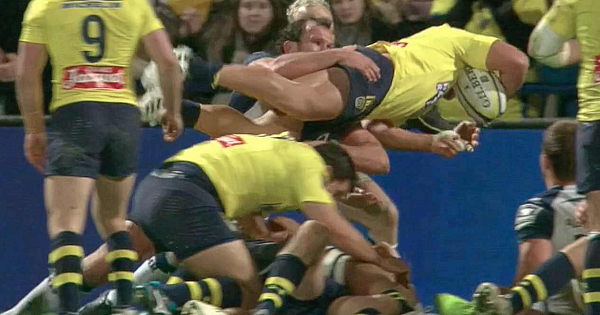 The 6 Nations kicks off in earnest this weekend, resulting in a break – albeit temporarily – in domestic rugby for the next fortnight. In France, the Top 14 and ProD2 do not resume until 17th February, but there were some fantastic tries scored in both leagues last weekend.

It was a topsy-turvy weekend in round 16 of the Top 14. Clermont Auvergne slipped to a narrow 30-29 defeat to leaders Montpellier at the Stade Marcel Michelin while Lyon continued their impressive form this year with a thumping 71-17 triumph over stragglers Agen.

A variety of superb passing skills, great counter-attack and generally cheeky play played their parts in the pick of the Top 14 scores.

Clermont’s Mali Hingano literally jumped at the chance to score when he opportunistically picked up the ball from the base of the ruck, and leapt over the line to touch down.

David Smith finished off a great team try from Castres in their defeat to Racing 92. It was a demonstration of how slick passing and support runners in the right place can cut open any defence.

In the ProD2, things were a lot tighter across the board with top-of-the-table Montauban securing a bonus point win over Narbonne. Narbonne were well beaten but arguably scored the pick of the tries from the whole weekend.

Leading 20-3 at the time, Montauban came within inches of touching down again after a cross-field kick. But the ball was secured perfectly by winger Juan Tuculet who raced down the far-side and chipped ahead, and collected for a wonderful coast-to-coast solo try.