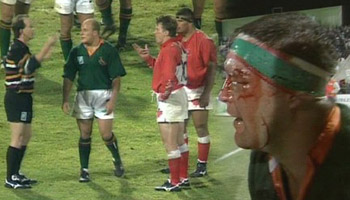 The day the lights went out on Boet Erasmus stadium, both literally and figuratively. Prematch, there was a power failure in the stadium which delayed kickoff. This seemed to add to the tension on the field.

By the time the Springboks met Canada on the field in this pool game during the 1995 World Cup, tensions were already flaring. Talk before the game was that the Canadians don’t normally stand back for anything.

It was a hard, physical match, which eventually boiled over with this now infamous series of events. The scuffle between Pieter Hendriks and Winston Stanley was under control until Kamakazi fullback Scott Stewart came flying in with a hit to the back of Hendriks’ head. James Dalton, who unfortunately had quite a reputation in the past, came to his teamates aid, but seemed to spark things even more. A mass brawl ensued.

In the end, ref Dave McHugh and his assistants decided to send off Dalton, Gareth Rees and Rod Snow. Dalton was judged to have sparked things, even though he later swore that he put his arms up when he ran in to protect himself, nothing more. Gareth Rees was in the middle of the punchup. No idea why Rod Snow was sent off.

Both Pieter Hendriks and James Dalton were banned from the rest of the tournament, subsequently missing the Springboks’ historic World Cup Final win against New Zealand.

The good news was that Chester Williams replaced Hendriks, going on to score a then record four tries against the Samoans and becoming a national hero.

Chief instigator Scott Stewart was never cited nor found guilty for his part in it all.

Note: Lookout for Hennie Le Roux’s haymakers in the middle of it all. He was also lucky to get away with it.